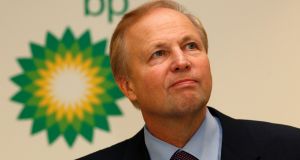 BP has tapped Irishman Bernard Looney and four other top non-US executives to steer efforts by the oil giant to explore for business in Iran without breaching US sanctions that remain in place, according to reports.

Mr Looney (46), a Kerry native, who became one of the youngest ever heads of BP’s exploration business earlier this year under a management shakeup, has been appointed to a new committee to search for deals in Iran, which excludes the group’s American chief executive Bob Dudley, according to Reuters.

The committee is being led by BP’s chief financial officer Brian Gilvary, a British national. Fellow Briton Rupert Bondy and Indian national Dev Sanyal are also on the committee, which does not involve any US citizens.

While international restrictions over Iran’s nuclear programme were lifted earlier this year, US sanctions linked to Islamic republic’s weapons and human rights record remain in place, meaning many businesses remain wary of doing deals with the country.

Earlier this month, French oil group Total said it would avoid US sanctions on Iran by using its own euro-dominated cash to finance the first western energy deal in the country since international restrictions were lifted. Total signed a $6 billion (€5.6 billion) agreement on November 8 to help Iran develop a gas field, together with Chinese state oil company CNPC.

Oil prices climbed to a three-week high on Tuesday on growing optimism that the Organisation of Petroleum Exporting Countries will overcome internal disputes to strike a deal next week to materially reduce crude output.

Opecis trying to bring its 14 member states, including regional foes Saudi Arabia and Iran, and non-Opec producer Russia to agree on a coordinated cut to prop up the market by bringing production into line with consumption.

1 Who are Ireland’s 17 billionaires?
2 My father in a nursing home wants to gift me his house
3 Are there annual limits on inheritances or gifts to a child?
4 Irish whiskey sales slow in US but distillery visitors top 1m locally
5 Dublin office vacancy rate hits lowest level in 20 years
6 Northern Ireland drops campaign for lower corporation tax rate
7 Shell counting the cost as sale of Corrib gas field completed
8 Pretax profits decline sharply at Tuam-based car tech firm
9 The economy and the election: Why everyone isn’t feeling the recovery
10 Help, I’ve no PRSI stamps – can I still get a pension?
Real news has value SUBSCRIBE