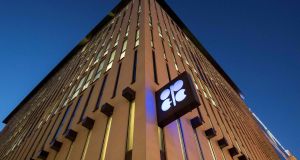 The Organisation of the Petroleum Exporting Countries (Opec) has agreed its first oil output cuts since 2008, a source told Reuters on Wednesday.

The source said the agreement was in line with an accord reached in Algiers in September.

OPEC member Algeria was proposing to set a new production ceiling at 32.5 million barrels per day, down from current levels of 33.6 million.

Before news of the deal emerged, oil prices jumped more than 8 per cent to a five-week high as some of the world’s largest oil producers gathered in Vienna to try to agree a production cut.

Brent crude futures for delivery in January were up $3.83, or 8.3 per cent, at $50.21 a barrel by 1236 GMT, recovering from a drop of nearly 4 per cent on Tuesday and on course for their biggest one-day move in nine months.

Opec started its meeting at 0900 GMT on Wednesday at its Vienna headquarters to discuss terms of a potential deal to cut production in an effort to prop up prices that have fallen by more than half since 2014 due to oversupply.

A source told Reuters that delegates were now discussing a bigger than expected cut in production of 1.4 million barrels per day (bpd).

A preliminary agreement struck in Algiers in September set an output cap at around 32.5-33 million barrels per day compared with the current 33.64 million bpd.

“It does rather look as though OPEC is going to come to an agreement,” said Colin Smith, director of oil and gas research at Panmure Gordon in London.

Heading into the meeting, Saudi Arabia’s energy minister, Khalid al-Falih, said the market’s fundamentals were moving in the right direction, but he believed the group was “getting close to a deal”.

“The extent of the (price) move shows no one wants to miss the boat. There must be a general consensus that there will be a cut, whether it’s going to be bullish, I don’t know, but it’s the domino effect,” PVM Oil Associates analyst Tamas Varga said.

An Iraqi delegate said on Wednesday that some form of agreement would be reached and Iran’s oil minister also said he was optimistic.

Traders said markets were jittery and prices could swing sharply in either direction depending on developments in Vienna.

Oil fell by nearly 4 per cent on Tuesday on reports of disputes between Saudi Arabia, Iran and Iraq over details of the planned production cut.

Iran and Iraq have been resisting pressure from Saudi Arabia to curtail production, making it harder for the group to reach an agreement on output cuts.

Analysts at Goldman Sachs, Barclays, and ANZ said oil prices would quickly fall to the low $40s a barrel if OPEC fails to strike a deal to cut output.