Prices for ilmenite, zircon rise throughout 2017 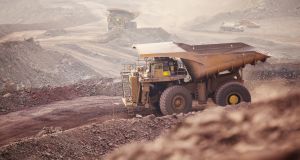 Kenmare Resources said it returned to profit in 2017 after production at its mines reached record levels.

The company, which is a leading global producer of titanium minerals and zircon, said profit after tax was $19.4 million for the year, compared to a loss of $15.2 million in 2016. Revenue rose 47 per cent to $208.3 million, and earnings before interest, taxation, depreciation and amortisation were almost $60 million for the 12 months to December 31st. Net debt was down to $34.1 million.

Annual production of of ilmenite, rutile and zircon was at a record level last year, the company said, hitting its guidance for all products. Ilmenite was up 11 per cent to 998,200 tonnes, with zircon up 9 per cent to 74,000 tonnes.

Kenmare operates the Moma mine in Mozambique.

“We are developing plans for a series of low capital-intensity brownfield expansion projects to increase mining capacity and fully utilise our installed plant capacity and export facilities, while helping to meet market demand as required,” managing director Michael Carvill said.

Ilmenite prices continued to rise through 2017, albeit at a slower rate in the second half of the year with low-grade concentrates weighing on prices. The company said received prices are expected to average at higher levels in 2018, with continued demand growth and a reduction of low quality ilmenite supporting prices.

Price rises were also seen in the zircon market, as it remained tightly supplied. Further rises have already been seen in 2018, but prices remain below peaks seen in 2012.

Then company is expecting a favourable demand outlook for ilmenite and zircon markets in 2018.