Glencore says it has capacity for deals despite $2.9bn dividend

Company cut net debt by about a third in 2017 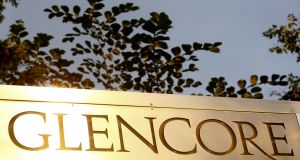 While Glencore’s competitors such as Rio Tinto Group shied away from dealmaking last year, Glencore announced acquisitions worth more than $4 billion in copper, oil, zinc and coal.

Glencore might have announced a whopping $2.9 billion ($2.4 billion) dividend, but that doesn’t mean the company’s dealmaking firepower is diminished.

“We’re generating $10 billion of free cash flow on current commodity prices,” chief executive officer Ivan Glasenberg said after reporting full-year results. “There is room if and when we want to do any acquisitions.”

Glencore cut net debt by about a third in 2017 and announced the bigger-than-expected dividend that’s well above its minimum pledged payout. The commodity trader and miner delivered the best trading results since the supercycle peak in 2008.

“Our performance in 2017 was our strongest on record, driven by our leading marketing and industrial asset businesses,” Mr Glasenberg said.

Glencore’s stock has soared 18 percent in the past year.

The earnings leave the billionaire CEO well positioned to continue doing he knows best – deals. While Glencore’s competitors such as Rio Tinto Group shied away from dealmaking last year, Glencore announced acquisitions worth more than $4 billion in copper, oil, zinc and coal.

There are currently no big ideas on the radar screen, however Glencore wants to grow its agriculture unit and believes the industry needs to consolidate, Glasenberg said on a call after the results. Last year, the company confirmed that it had made an unsuccessful merger approach to Bunge Ltd., one of the biggest US agriculture traders.

Glencore previously had an agreement with Bunge barring it from making an unsolicited bid, but the stand-still agreement has now ended.

Glencore “retains significant flexibility for future use of capital, either through further MandA or increased dividends,” Tyler Broda, an analyst at RBC Capital Markets, said in a note.

Glencore’s adjusted earnings before interest and taxes more than doubled to $8.55 billion. That missed an average analyst estimate of $8.86 billion, as Glencore’s positive results were tempered by rising costs and the weaker dollar against currencies such as the South African rand and Australian dollar.

The Swiss commodity giant has long positioned its trading business, which deals in almost 100 raw materials, as a key difference between it and other mining majors, which tend to market less of their own production. Glencore profited from resurgent prices for copper, nickel, zinc and cobalt, all trading at multi year highs.