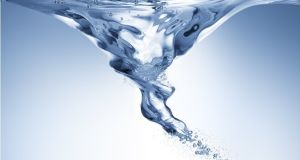 The company’s technology works by passing water through a series of filters and then into a helical UV reactor chamber where the UV light inactivates all bacteria, pathogens and micro-organisms.

Co Wicklow-based H2Ozone has signed a multimillion euro licensing deal with water distribution giant Xylem that could see it gaining access to more than 150 countries for its innovative purification products.

The Irish water-treatment tech company has agreed an initial deal that will see Xylem distribute H2Ozone’s water purification units, which are sold under the Hydroinfinity brand, in the United Kingdom, South Africa, the Netherlands and Germany.

However, given Xylem’s global reach it is expected that the deal could lead to the company gaining access to many more markets.

While no financial details of the agreement have been disclosed, it is understood that the initial deal is worth about €7.5 million.

H2Ozone has two key products: RainSafe, which is for use in domestic and commercial users including nursing homes and restaurants; and AgriSafe, a solution specifically tailored for livestock producers.

The company’s technology works by passing water through a series of filters and then into a helical UV reactor chamber where the UV light inactivates all bacteria, pathogens and micro-organisms. Ozone is then delivered through a diffuser into the water reservoir as the final step in the natural purification process.

Xylem is a NYSE-listed water technology company with a market capitalisation of over $13 billion (€10.6 billion) and distribution capabilities into over 150 countries. Founded in 2011 as a spin-off from ITT Corporation, the New York State-headquartered company recently reported $4.7 billion (€3.8 billion) in 2017 revenue.

H20zone has developed patent-protected technology that removes the threat of bacteria and micro-organisms in water including E.coli, salmonella, legionella, and cryptosporidium. It can be used to treat water from any source and it does so without using any chemicals.

In addition to teaming up with Xylem, H2Ozone is also targeting the French and Portuguese markets through distribution agreements with CWT Preval (France) and Sol Ambiente (Portugal).

“These deals dramatically expand the scope of our distribution capability and will accelerate our sales trajectory in 2018. Our product provides a chemical free and cost-effective way of purifying water from any source, removing the threat posed by bacteria and micro-organisms,” said executive chairman Paul O’Grady.

H2Ozone recently raised €3 million in fresh investment from backers that include Danu Partners, a Louis Fitzgerald-led consortium, and the family of Henry Bolger, who founded Modern Plant, which distributes Mira showers in Ireland.