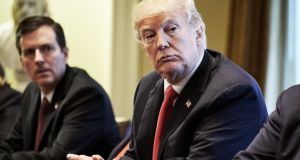 US president Donald Trump listens during a meeting with steel and aluminium executives in the Cabinet Room of the White House in Washington, on Thursday. Photograph: Bloomberg

US president Donald Trump doubled-down on his promise to impose steep tariffs on steel and aluminium imports coming into the United States, claiming that trade wars were “good, and easy to win”.

In a series of early-morning tweets yesterday the president defended his announcement on Thursday that astounded markets and even some of his own officials. “When a country (USA) is losing many billions of dollars on trade with virtually every country it does business with, trade wars are good, and easy to win,” he tweeted. He followed up minutes later: “We must protect our country and our workers. Our steel industry is in bad shape. IF YOU DON’T HAVE STEEL, YOU DON’T HAVE A COUNTRY!”

Mr Trump announced plans to impose a 25 per cent tariff on steel, and 10 per cent on aluminium imports following a meeting with more than a dozen steel and aluminium executives in the White House on Thursday. The measures are expected to be formally endorsed next week. The White House is using a rarely-deployed World Trade Organisation (WTO) rule that allows countries to pursue trade measures when it is in their national security interest.

While China appeared to be the focus of Mr Trump’s actions, Canada, South Korea, Mexico and Germany are among the biggest exporters of steel to the United States. The measures were cheered by steel manufacturers, reflected in their rising stock prices. But US manufacturers that use steel and aluminium imports, including the automobile and aerospace industries, reacted with alarm.

The EU said it will impose retaliatory measures in the wake of the move, but will await the formal imposition of the new US measures next week before taking action.

But there are fears in Brussels that the retaliation by the EU and other international traders such as Canada, could escalate into a full-scale trade war involving the EU, China and other trade partners.

EU trade commissioner Cecilia Malmstrom told the Financial Times that the EU had no choice but to respond. She said the Trump administration’s decision to use a national security statute to apply tariffs was of particular concern.

Mr Trump signed the order on Thursday following the publication of a report ordered last year into whether a surge in imports undermined the US’s ability to source the steel and aluminium it needs to build military equipment such as tanks and warships, as well as the nation’s broader economic security.

The US has to date declined to use the “national security” loophole in WTO rules for fear other states would follow its example.

It is understood that Mr Trump’s advisers were split on the issue, with some such as former Goldman Sachs executive Gary Cohn opposed and trade officials Wilbur Ross and Peter Navarro in favour.

European Commission president Jean-Claude Juncker also said the EU would respond.”The EU has been a close security ally of the US for decades. We will not sit idly while our industry is hit with unfair measures that put thousands of European jobs at risk,” he said. He said the “countermeasures” would be compatible with World Trade Organisation rules.