Electric vehicle boom drives Apple to stock up on cobalt 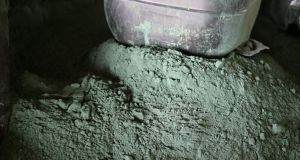 Apple is keen to ensure that cobalt supplies for its iPhone and iPad batteries will be sufficient, with the rapid growth in battery demand for electric vehicles threatening to create a shortage of the raw material. Photograph: Lucien Kahozi/AFP/Getty Images

Apple is in talks to buy long-term supplies of cobalt directly from miners for the first time, according to sources, seeking to ensure it will have enough of the key battery ingredient amid industry fears of a shortage driven by the electric vehicle boom.

The iPhone maker is one of the world’s largest end users of cobalt for the batteries in its gadgets, but until now it has left the business of buying the metal to the companies that make its batteries.

The talks show that the tech giant is keen to ensure that cobalt supplies for its iPhone and iPad batteries will be sufficient, with the rapid growth in battery demand for electric vehicles threatening to create a shortage of the raw material. About a quarter of global cobalt production is used in smartphones.

Apple is seeking contracts to secure several thousand metric tons of cobalt a year for five years or longer, according to one source, declining to be named as the discussions are confidential. An Apple spokesman declined to comment. Glencore chief executive Ivan Glasenberg late last year named Apple among several companies the miner was talking to about cobalt, without giving further details.

The move means Apple will find itself in competition with carmakers and battery producers to lock up cobalt supplies. Companies from BMW and Volkswagen to Samsung are racing to sign multi-year cobalt contracts deals to ensure they have sufficient supplies of the metal to meet ambitious targets for electric vehicle production. – Bloomberg