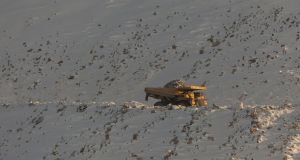 As part of its takeover of Kennady, MPD will provide the former it with $10 million in funding to continue its diamond exploration activities.

Mountain Province Diamonds (MPD), a listed Canadian company whose main shareholder is Dermot Desmond, is to acquire another listed operation linked to Mr Desmond, Kennady Diamonds, in a deal worth 176 million Canadian dollars.

The transaction will bring together the financier’s two main resource plays under one roof. Mr Desmond controls 24 per cent of MPD, which owns almost half of Gahcho Kue, a huge new diamond mine in production on the edge of the Arctic Circle.

He also owns 28 per cent of Kennady, which is separately exploring for diamonds on a huge swathe of land in the Canadian tundra adjacent to the Gahcho Kue project.

Mr Desmond, whose imprimatur would have been essential in order for the deal to go ahead, has already indicated he will back the takeover plan.

MPD will acquire Kennady by way of an all-share deal, and no cash will change hands. Kennady shareholders will receive 0.975 MPD shares for every Kennady share in issuance, implying a share price of 3.46 Canadian dollars.

This is a 26 per cent premium to Kennady’s closing price before the weekend. If the deal is voted through by the shareholders of both companies, MPD investors will own 76 per cent of the enlarged entity, while Kennady’s shareholders will own 24 per cent.

Both MPD and Kennady are chaired by Mr Desmond’s close associate, Jonathan Comerford, who works for the financier’s International Investment and Underwriting vehicle in Dublin.

Both boards have backed the deal which, if approved by a majority of shareholders, will be completed in April, subject to court approval for the scheme of arrangement. Mr Comerford noted his “conflicts” in relation to the deal, and abstained from the vote, MPD said.

MPD’s share price had fallen by just over 4 per cent by mid-afternoon trading on Monday in Toronto, while Kennady’s shares were up more than 16 per cent.

The rationale for the deal as set out by MPD to investors includes that Kennady’s exploration activities can be funded from the cash flow MPD is generating on the back of its Gahcho Kue diamond sales.

As part of its takeover of Kennady, MPD will provide it with $10 million in funding to continue its diamond exploration activities.