Permanent TSB, Cairn Homes, Flutter Entertainment and Ryanair among those singled out 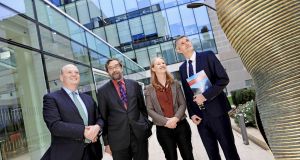 Several leading Irish companies such as Permanent TSB, Cairn Homes, Flutter Entertainment and Ryanair have been named and shamed for not reporting their greenhouse gas emissions.

CDP, a not-for-profit organisation that measures companies’ environmental impact, highlighted those prominent names in its report which found that the average Irish company reduced its CO2 emissions by 11 per cent last year.

Among the top performers in the survey were Kingspan, AIB, Kerry Group, Smurfit Kappa and CRH.

Kingspan was among two companies in Ireland out of the 179 globally to achieve an A rating from the organisation, while 67 per cent of companies reviewed received a B grade or higher, an improvement from the 63 per cent in 2018.

The average amount of CO2 emitted by companies with operations in Ireland was 66,228 tonnes, according to the climate change report from CDP – formerly the Carbon Disclosure Project – which works with institutional investors with assets of $96 trillion (€88.7 trillion) under management.

“CDP’s analysis has found that 215 of the biggest global companies estimate the financial implications of climate risks to be close to $1 trillion. That’s the scary challenge, but the good news is that forward-thinking companies are taking action and setting emissions reductions targets that are grounded in climate science,” said Paul Simpson, CDP’s chief executive.

London-based CDP assessed more than 8,400 companies worldwide in 2019 across a range of environmental standards.

CDP measures a company’s success by their setting of targets consistent with the goals agreed at the 2015 Paris Climate Conference – to keep the global temperature increase below 2 degrees Celsius. Setting goals to move towards using 100 per cent renewable energy also helps to advance in the ranking. “On these initiatives, Irish companies lag somewhat behind the EU average,” the group said.

Other companies with operations in the Republic that made the list include Accenture in second position, Ingersoll-Rand in fourth, Mainstream Renewable Power in sixth and Shire in eighth.