Germany drops opposition to fiscal boost in event of downturns

Change of tack deemed a breakthrough by French finance minister 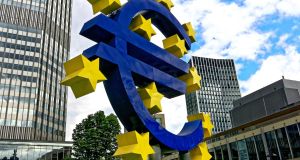 The euro zone should be ready to spend more if a downturn hits its economy, Germany’s finance minister and his counterparts in the bloc said on Tuesday, in a first cautious hint at stepping up public investment.

The 19-country euro zone has for years stuck to a “broadly neutral” fiscal policy in its annual recommendations, despite repeated calls from the European Central Bank and slow-growth states for it to invest more.

But last year’s slowdown and risks of a new downturn, heightened now by the coronavirus outbreak, pushed Germany to drop its traditional veto to fiscal boosts.

The change in the wording of a joint euro zone statement does not force Germany to actually spend more, but signals a change of attitude that could even lead to an overhaul of EU fiscal rules to make them less strict.

The move was deemed a breakthrough by France’s finance minister, Bruno Le Maire, who said the 19 countries of the euro zone had given their nod to more fiscal stimulus.

“We made major progress. For the first time in years the 19 countries of the euro zone say that we should use the fiscal stimulus,” Mr Le Maire told reporters on the sidelines of a meeting of EU finance ministers.

“The monetary stimulus is not sufficient. The fiscal stimulus should take over if a slowdown is too pronounced,” Mr Le Maire said, summarising the content of the joint euro zone statement.

The document signals a departure from past recommendations and gives more prominence to growth.

European Commission vice-president Valdis Dombrovskis said the change of tack was due to last year’s slowdown and a weak outlook for 2020 and beyond.

But the statement remains very cautious and underlines that only countries with adequate savings should invest more, ruling out more spending in states with unbalanced budgets.

“If downside risks were to materialise, fiscal responses should be differentiated, aiming for a more supportive stance at the aggregate level, while ensuring full respect of the Stability and Growth Pact,” the statement said, referring to the compact that underpins EU fiscal rules.

Germany’s finance minister Olaf Scholz agreed to the joint text in a move that could pave the way for Berlin to spend more next year.

Scholz has already said in the past that he was ready to spend more public funds to counter downturns. But despite a sharp slowdown in the German economy last year he maintained large, but declining, budget surpluses in the first nine months of the year, Eurostat data released in January show.

A review of EU fiscal rules is under way and is expected to lead to proposals for changes by the commission after the summer, as they are deemed to be too complex. Many say they are also limiting growth.

Mr Le Maire said the EU should make it easier to invest public resources in green projects that could facilitate the transition towards a more sustainable economy.

These investments already benefit from some flexibility under EU fiscal rules, but France, Italy and other high-debt countries of the bloc want more leeway. Germany has so far opposed this change. – Reuters