Consumer prices up 1.3% over past year

Inflation driven by price rises in education and housing 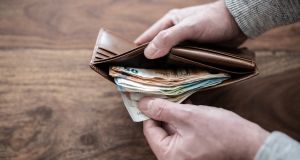 Consumer prices in January decreased 0.7 per cent compared to December, the same fall that was recorded the previous year. Photograph: iStock

Consumer prices were 1.3 per cent higher in January than in the same month of 2019, according to figures released by the Central Statistics Office (CSO).

Inflation over the course of the 12-month period was driven by a 4.1 per cent rise in education costs, a 3.8 per cent increase in the prices of alcoholic beverages and tobacco and a 3.5 per cent increase in prices in the housing, water, electricity, gas and other fuels category.

Higher rents and mortgage interest repayments, in addition to an increase in the cost of home heating oil and electricity, were responsible for the rise in the last category.

Communications prices fell 10.6 per cent as a result of a reduction in the cost of telephone services while prices in the furnishings and household equipment category dipped 2.7 per cent.

Consumer prices in January decreased 0.7 per cent compared to December, the same fall that was recorded the previous year. The most significant monthly changes were decreases in clothing and footwear (7 per cent) and transport (2.3 per cent). An increase were recorded in the alcoholic beverages and tobacco category (3.9 per cent).

Prices on average, as measured by the EU Harmonised Index of Consumer Prices (HICP) increase by 1.1 per cent compared with January 2019. The HICP fell 0.7 per cent in the month.