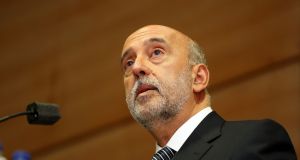 There is potential for a negative shock to the growth of the international economy in the short term from the coronavirus, the Central Bank’s governor said in a speech in Dublin.

The risk of coronavirus upsetting economic growth in the Republic was one of two flagged by Gabriel Makhlouf.

He said that while it is premature to reach any conclusions on the impact the virus may have, he said any impact on the Irish economy would be felt through both direct and indirect channels.

“From a decline in demand for Irish exports to China, to the negative impact on overall world demand and a consequential impact on Irish exports. As China accounts for a large and growing share of world output ... we would expect a disruption to China’s economy to have an impact on Ireland,” he said.

European Central Bank chief economist and former Central Bank governor Philip Lane, at the same event, said he expects that the Coronavirus could have a pretty serious short term hit but that the impact of the virus might be relatively minor over the longer term.

Opening the European Financial Forum in Dublin Castle, Taoiseach Leo Varadkar said financial services have played a significant role in helping the Republic achieve “our place as a forward looking country integrated into the global economy”.

“They contribute jobs and tax revenues to fund our public services, and trade and investment reaffirm our position in the world economy,” he said, noting that the economy is “performing well”.

Mr Makhlouf built upon that saying that the outlook for the economy remains positive in the short term.

“Some moderation in underlying domestic demand growth is likely while some significant risks remain,” he said.