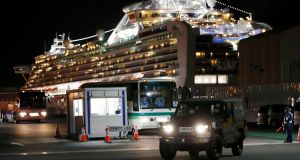 As Japan struggles to rein in the spread of a coronavirus, some investors are starting to worry the epidemic could scupper the Olympics set to start in Tokyo from July 24th, hitting shares of companies ranging from sportsgear makers to event organisers.

The epidemic has killed 2,100 people and appears to be slowing in China this week after authorities took tough measures, but Japan is seeing an increase in the number of new infections, alarming some investors.

Domestic infections have risen to about 70, including 25 in the capital, Tokyo, apart from more than 620 passengers on the Diamond Princess cruise ship, the largest cluster outside China’s central province of Hubei.

“Calling off the Olympics is no longer unthinkable, and markets are starting to price that in,” said Naoya Oshikubo, senior research manager at Mitsui Sumitomo Trust Asset Management, though he cautioned that was not his main scenario.

Japan’s Nikkei benchmark has lost 0.9 per cent this week, worse than Wall Street and mainland China peers, but not a staggering underperformance either, thanks to a generally upbeat tone in global equity markets.

But the shares of companies expected to benefit from the Olympics experienced more dramatic impact.

Among the worst hit were companies that help to organise big events. Nomura tumbled 7.5 per cent, while Hibino lost 9.1 per cent.

Sports wear makers were also affected, with Asics Corp down 6.0 per cent and Mizuno down 3.8 per cent.

The outbreak came as the world’s third largest economy suffered its steepest contraction in five years in the last three months of 2019.

The economy is likely to shrink further in the current quarter. Inbound tourism has dropped sharply since late January while many Japanese companies are starting to cancel large meetings and other events.

Sports events are no exception, with Tokyo Marathon organisers cancelling entries from the public for the March 1st race.

Still, many investors hope the outbreak will be contained by the summer, when higher humidity levels could reduce virus transmissions, as with an outbreak of Severe Acute Respiratory Syndrome in 2002 and 2003.

“Assuming the same duration as SARS implies that the last new case would appear in late June and the WHO would declare the outbreak contained around late July,” said Naohiko Baba, chief Japan economist at Goldman Sachs.

“The outbreak itself will be effectively under control well ahead of that time, consistent with the duration of SARS. That said, we acknowledge the huge uncertainty and rapidly changing facts on the ground.”

Yasuo Sakuma, chief investment officer at Libra Investments, said he did not expect the Olympics to be called off but warned that the market was a bit too complacent about the epidemic.

“Many domestic investors look too optimistic, vaguely expecting everything will go back to normal quickly, once the outbreak is over,” he added. – Reuters