Ireland does not need a posse of super-charged, bonus-snorting bankers

Caveat: Restrictions on bankers’ salaries example of when populism can be benign 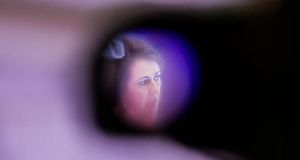 AIB deputy chair Catherine Woods during the bank’s agm at The Ballsbridge Hotel in Dublin. She said pay restrictions were of “concern” to investors. Photograph: Gareth Chaney/Collins

State-controlled bank AIB has stepped up its long-running campaign to convince the Government that the crisis-era restrictions that were brought in on bankers’ pay are past their sell-by date. Catherine Woods, the bank’s deputy chairperson, said the issue is of “concern” to investors. If she thinks banker pay and bonuses are a concern for investors, just wait until she gets a load of the concern of the general public if the Government moves to lift the restrictions.

Woods was backed up this week up by Colin Hunt, the bank’s recently-appointed chief executive, who told reporters at its agm in Dublin on Wednesday that the restrictions, which include a €500,000 salary cap and an effective bonus ban via an 89 per cent incentive supertax, are affecting the bank’s ability to hire middle managers, the “lifeblood” of its future.

A proper retort to this, from the taxpayers who saved the bank a decade ago, might be that the people of Ireland are only all too familiar with how lifeblood can be affected by bankers high on bonuses. They almost sucked the lifeblood out of the country and the mental scars of that are still far from healed. That may be inconvenient to hear for an institution that wants the flexibility to tempt senior bankers to relocate to Dublin from other financial centres. It may also smack of populism. But this is where we are, and the errant past behaviour of bankers helped to get us here. The industry helped to fashion the rod for its own back.

It’s also worth pointing out to Hunt that these supposedly lifeblood-sucking restrictions didn’t deter him from recently taking up his role, and he, presumably, rates himself. What’s good for the goose . . .

So far, Fine Gael’s Paschal Donohoe, the Minister for Finance, has not been for turning. How could he be otherwise? He is part of an inherently unstable minority government, propped up by his party’s mortal enemy, Fianna Fáil. We could face an election at short notice. Facilitating pay rises for bankers is hardly a vote winner. The effective bonus ban is also written into the law books. It will only be unwound by a vote of the Oireachtas. Good luck with that.

The restrictions on banker pay were motivated by pure, unadulterated populism when they were first brought in a decade ago as the State teetered on the brink following the financial collapse. Populism these days is often disparaged as a malign force, associated with acts of electoral self-harm such as Brexit or the presidential win of Donald Trump. Yet populism, correctly deployed, can also have a vital role to play in maintaining social cohesion during times of collective strife. It has a time and a place. The dog days of 2009 when the salary cap was born and nobody knew what the future held was just such a place.

The cap was brought in by the former minister for finance, Fianna Fáil’s Brian Lenihan, just as the scales were beginning to fall from the eyes of the State over the extent of the manure pile that the banks had dumped on the doorstep of Government buildings. Ciroc, the Covered Institutions Remuneration Oversight Committee, recommended that bank chief executive salaries be capped at €690,000, with a sliding scale for some of the smaller institutions.

Lenihan, who was hardly an inherent populist given some of the other financial measures he was later prepared to introduce, immediately knew that he would have to go even lower than the recommendation from his own committee. Even if he didn’t yet know the full extent of it, he knew the State faced a long road ahead paved by painful spending cuts and tax rises. It would be a struggle to keep an angry public on board. So he plumped for €500,000 and held firm as the banks, even then, threw their toys out of the pram.

The industry presumably wants to return to a more normalised culture for rewarding senior bank executives. But what is normal?

In 2007, during the last dance of the boom, bankers were paid preposterous sums. Brian Goggin at Bank of Ireland had to make do with just €4 million. David Drumm at Anglo Irish Bank got by on €3.3 million. Michael Fingleton at Irish Nationwide was gilded with €2.3 million. When the beginnings of the crisis emerged, and Goggin went on RTÉ to reassure the public that he would only be paid “less than €2 million”, the farce that is normality when it comes to banker pay was revealed.

Woods told the AIB agm this week that the bank simply wants to be able to “compete with the remuneration practices of other employers”. By other employers, she means other major banks. Why should taxpayers, who we now know are the perpetual guarantors of the banking system, facilitate competition between banks for bankers? If you are a banker looking for a pay rise, this may sound a bit Life of Brian-ish: but what’s in it for us, eh?

Society doesn’t necessarily need a financial system led by a posse of super-charged, bonus-snorting bankers, who play their successive head-hunting employers off each other and then justify their huge pay packets by taking ridiculous lending risks. We’ve been there and worn that T-shirt, and it was horrible for the rest of us.

Bankers will argue that the restrictions stop them hiring the best people, which means the banks then underperform, and that this ultimately negatively affects the rest of society, which needs vibrant banks. Is this true? They should show us evidence for it. Not dire, Cassandrian predictions of doom, for that is not evidence. Show us real, tangible proof that the banks are being properly damaged by the pay restrictions, in the context of the role the banks play in society. Let that be the basis for opening discussions.

Donohoe may or may not continue to hold his ground. He has a report on banker pay on his desk from consultants Korn Ferry, which is said to conclude that the restrictions are unsustainable. Reports such as this are often used as cover by ministers to make unpopular decisions. It would be hard to fathom a more politically unpopular decision than allowing bankers return to their warped pay structures of the past.

– This week’s AIB agm was also the scene of a demonstration by farmers, who are opposed to the selling of farm-backed loans to so-called “vulture funds”. Farmers’ groups fear these funds will repossess farms and sell them for profit. It is an emotive topic. But the emotions of the heart should never be allowed to overrule the logic of the head.

Martin Stapleton of the Irish Farmers’ Association told Jack Horgan-Jones of this newspaper that his members would boycott the sale of any repossessed farms that were put on the market by funds: “In effect we will boycott any proposed sale. We have done so in the past and we will do so again . . . None of our members would buy that farm, so in actual fact, [it would] make the farm valueless.”

Perhaps Stapleton is simply very good at predicting what IFA members would themselves individually choose to do. But his comments also stray dangerously close to allowing the perception that the IFA could attempt to co-ordinate the actions of its members on this issue. That is sure to prick ears at the Competition and Consumer Protection Commission, which recently took enforcement action against other groups, such as the Restaurants Association of Ireland, for co-ordinating action by its members on a different issue.

– Fast fashion group Primark/Penneys provided the cream on this week’s trading update from its listed parent, Associated British Foods. The Irish retailer stumped up the bulk of ABF’s profit growth.

Primark continues to resist the seemingly unstoppable slide towards online for traditional retailers. It doesn’t do digital sales, which is heresy in the industry. Yet Primark seems to be getting along just fine.

Meanwhile, Asos, the doyenne of the online fashion market, is wondering how to tweak its operating model to discourage a flood of expensive returns that has turned it into a clothing “rental service” in the eyes of some of its users, its management says.

Maybe Primark is on to something after all.