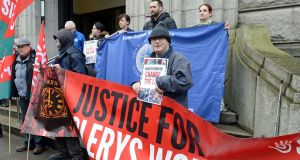 The most extraordinary thing about the offer last week from US fund Gordon Brothers to reimburse the losses of 50 former concession holders at Clerys is its timing, the month before a court hearing into its executives’ alleged conduct.

It is almost four years since Gordon Brothers sold Clerys “as a going concern” for €29 million, only for the buyers to put Dublin’s best known department store into liquidation a few hours later, leaving its staff on the street outside.

The circumstances surrounding the deal will forever be remembered by many as an exemplar of the most cynical form of rapacious corporate restructuring. Even hardened capitalists still look upon it as a heartless deal in the manner in which it was executed, leaving taxpayers, staff and trade creditors to carry all the losses while the buyers and sellers of Clerys made a fortune.

Still, if Gordon Brothers was so worried about the effect on small concessionaires, it could have reimbursed them all back in 2015 when the store was closed in such controversial circumstances.

The €785,000 offer last week, which includes a gagging clause, arrived just three weeks before a scheduled High Court hearing over the Clerys closure. The KPMG liquidators of OCS Operations, the old Clerys operating company, have filed a court application seeking to restrict two former Gordon Brothers executives as directors over their alleged conduct on the Clerys board.

The executives, Rafael Klotz and Malcolm MacAulay, signed off on the sale. They say they believed the store would still be run as a going concern. They signed audited accounts to that effect the day before the sale, and they were directors of Clerys as the sale process was being agreed, and the concessionaires takings were being accrued and held “in trust” for them.

What Klotz and MacAulay knew about the closure plan, and when, is obviously crucial to the restriction case. Any such case against them would surely be buttressed by having as much evidence and testimony available to the court as possible.

It seems a strange time, therefore, to be including a gagging clause as part of any offer to concessionaires.

The letter conveying the offer said that any concessionaires signing up for its cash would have to agree to a waiver protecting Klotz, MacAulay, Gordon Brothers and OCS Operations from a series of potential scenarios. Firstly, the concessionaires would have to promise not to sue or prosecute them or help anybody else to sue or prosecute them “in this jurisdiction or any other”.

Those wanting financial reimbursement – which simply equates to what they were owed by Clerys – would also have to promise not to say anything “critical or derogatory” about OCS, Gordon Brothers and its executives, “save in respect of any disclosure required to be made by law”.

Of course, maybe evidence from the concesisonaires would not be necessary in the looming High Court action.

The €785,000 reimbursement scheme, including the collection of gagging clauses, is being administered on Gordon Brothers’ behalf by the KPMG liquidators – the same people tasked with overseeing the restriction case against Klotz and MacAulay.

It seems odd that the liquidators in charge of compiling a case against the Gordon Brothers executives would simultaneously collect waivers that would help to protect the same executives from legal action. But the KPMG liquidators are also legally mandated to put the interests of creditors first.

The Gordon Brothers offer may be four years late and its timing curious. Yet it also provides a path for concessionaires to be made whole when they would otherwise be left swinging. The offer will be too good for many to ignore.

Not every former concession holder will accept it, however. Wicklow-based hotelier Lorraine Sweeney operated the cafe at Clerys. She was originally left €46,000 out of pocket by the closure, although about half of that was later reimbursed from the liquidation proceeds. Sweeney could take the other half from Gordon Brothers now and walk away. But she won’t.

Sweeney’s LS Catering is taking legal action over the Clerys closure as part of the liquidation process. She has been highly critical of Klotz and MacAulay’s alleged conduct in the lead-up to the sale, although they have denied any wrongdoing.

Sweeney this week dismissed the Gordon Brothers offer as “calculated . . . [and] contemptuous”, and unhelpful to ongoing legal proceedings, where LS Catering is seeking answers about the closure from Gordon Brothers and KPMG.

“I feel it is a token payment for the Gordon Brothers executives to offer four years after the event,” she said. “Naturally, many concession holders will accept this because of the losses they suffered. However, in my case, I have decided that the legal process is worth the battle to bring justice.

“We are being treated like small shopkeepers. They are offering breadcrumbs from their dining table. This concession holder would rather go hungry.”

Other concessionaires will simply be glad to eat.

The High Court inspectors appointed to examine a range of allegations at Independent News & Media (INM) are, we are told, proceeding slowly but, presumably, surely with their investigation.

Barrister Sean Gillane, who specialises in criminal law, and Richard Fleck, a UK-based solicitor and corporate governance expert, are due to report on the first stage of their INM findings to the court next month.

Gillane, at least, may now be able to devote more time in coming months to the investigation than he may otherwise have had, following the recent collapse of the trial of Regency Hotel murder accused, Patrick Hutch, who left court a free man last month. Gillane was meant to be the prosecuting counsel in that case.

No word on whether the inspectors have yet interviewed former INM chairman Leslie Buckley, who has kept his head down in recent months.

Meanwhile, Buckley’s investment in nutritional supplements company, Nualtra, may yet require his attention as a legendary financial nitpicker. Accounts filed this week for the company show its accumulated losses have risen by almost 15 per cent to €5.1 million, although much of its chunky costs in recent years were accrued during a series of legal cases against one of its competitors.

Those cases are now finished and Nualtra is eyeing growth. Music to the ears, no doubt, of Buckley, who sits on the company’s board alongside his son JD Buckley and Sean Corkery, the chairman of Denis O’Brien’s Actavo group.

Rugby international Johnny Sexton has been appointed as an “ambassador” for Anne Heraty and Paul Carroll’s listed recruiter, CPL Resources.

“The world rugby player of the year is embarking on a new corporate career, bringing his high performance mindset, including mental resilience, teamwork, leadership and versatility to CPL and its business clients,” said the firm.

Sexton’s “high performance mindset” also included dishing out plenty of what would otherwise be known as “bollockings”. He is notorious for it. Oh, what fun it would be to watch him bring that mindset along to a CPL client event.