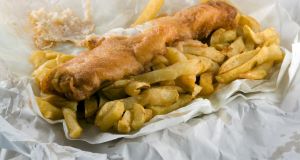 Ireland-Italy trade goes far beyond the traditional fish and chips

For decades, Italy’s main export here was in people – the families running the humble fish and chipper. It began in the 1880s, when Italian migrant Giuseppe Cervi stepped off an American-bound ship in Cobh (then Queenstown), moved to Dublin and, after a few failed food ventures, decided on fried fish and cooked potato as the best route to Irish culinary hearts.

He was followed into the trade by a tight-knit group of Italian families – the Borzas, the Cafollas and the Macaris – names which still dominate the Dublin trade today. And so it was that the Italians in Ireland became renowned not for pizza and pasta but for chippers. While a bag of chips on the way home from a night on the tiles is still a staple, the trade pales in comparison to the nearly €14 billion in bilateral trade that now exists between the two countries.

Italy is now Ireland’s ninth-largest export market. And in 2018, Ireland generated a €2 billion trade surplus with Italy on the back of exports of medical devices, dairy products, telecommunications and transport equipment. For its part, Italy exports a significant chunk of financial services here as well as food.

The strength of the trade prompted the launch last week of the inaugural Italian Irish Chamber of Commerce. More than 40 businesses have already signed up to it, including international shipping firm d’Amico, Intesa Sanpaolo Bank and Mediolanum Asset Management, one of Ireland’s largest investment houses.

Cutting the ribbon on the State’s newest trade body, Minister for Foreign Affairs and Trade Simon Coveney waxed lyrical about the blossoming trade between the two nations.

“While the traditional sectors associated with Italian trade such as food and beverages are always strong, the mobile telecoms and financial services sectors are growing also, with companies such as Soldo and Mediolanum operating on these shores,” he said.