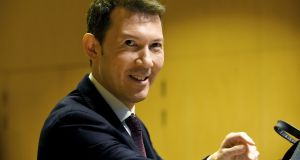 Air France-KLM head-hunted Ben Smith to be its chief executive in 2018, because he had played a key role in Air Canada’s spectacular recovery. Conditions at Air France were hardly auspicious at the time. An extended pilots’ strike had just bled the airline of another €335 million.

The pilots accused management of diverting business to KLM, where costs, in particular airport taxes and social charges, are lower.

No one has forgotten a video that went viral in 2015, of two Air France executives climbing a chain-link fence, their shirts torn off by angry members of the neo-Communist CGT trade union.

“A lot of my friends and colleagues said, ‘Are you out of your mind?’,” Smith (now 48) told the Anglo-American Press Association in a group interview. Nearly a year and a half later, Smith has no regrets. “If you don’t like challenges, you should not be in the airline business,” he says. His greatest achievement has been to improve Air France’s abysmal labour relations.

We met Smith as a six-week-long, nationwide strike in France against pension reform was winding down.

“We were able to fulfil 100 per cent of our operations, except for flights that were affected by an air traffic control slowdown,” Smith says. “That is a big first for Air France. On a peak day, we may have had 10 or 11 pilots out, of 4,000, which had no impact on the operation.”

When Smith was appointed, trade unions issued a statement denouncing the arrival of “a foreigner whose candidacy is supported by a rival industrial group” – a reference to the US airline Delta.

“Union members were saying: ‘We’re going to welcome him with a strike, the moment he gets off the plane. Introduce him to France’,” Smith recalls with a smile. He also discovered the hostile use of the word “Anglo-Saxon”, which he didn’t think applied to him as a Canadian of Hong Kong Chinese and Australian origin.

More than a year later, trade unionists at the airline told Guy Dutheil, Le Monde’s aeronautics correspondent, that Smith is “worshipped like a rock star” within the company. “For the first time, Air France-KLM has a boss who knows the airline sector,” Dutheil explains. “Employees liked the fact he knew what he was talking about. And especially, he signed agreements raising the salaries for all categories of personnel. People are happy, for the time being.”

Business the world over could take a lesson from Smith’s affable, low-key management style. Based on respect and one-to-one contact, it contrasts starkly with the hauteur of his predecessors from the French grandes écoles.

“We’ve signed 30 labour agreements in a year, and we didn’t have one failure,” Smith says proudly. He is delighted that Air France pilots have lifted their veto on the expansion of Transavia, Air France-KLM’s low-cost subsidiary, which was hitherto limited to 40 aircraft. In 2014, pilots went on a strike costing €400 million, because they did not want the company to pay lower salaries to Transavia pilots.

Asked if he changed his management strategy from his Air Canada days, Smith replied: “What hasn’t changed for me is ensuring that all our employees feel like they’re the number one asset of the group. If there’s a key to my success at Air Canada, it was to push for that.”

When he arrived in Paris, Smith had to learn quickly about 17 different trade unions and their respective ideologies. “You’re not dealing with one group when you’re negotiating,” he says. “I spent a lot of time taking the first step, to try to earn trust. I did a lot of direct negotiating with Air France staff, which was new for them… It was just being face to face, trying to understand as quickly as possible what their main issues were, which in many cases was just lack of respect and not feeling they were assets.”

There was a cultural adjustment. Smith was advised not to try to shrink lunch time “because it’s sacred” and not to touch vacation time either. He was surprised to learn that Air France spends €120 million to finance the comité d’entreprise, the union-run committee that provides staff with restaurants and group activities.

Smith found employee attitudes ranged from those obsessed with their work/life balance to workaholics who put in extremely long hours. “It’s more of a challenge here in France than in Canada, differentiating, compensating, encouraging, and validating the extra efforts that some people make.”

Among Air France employees “the level of education is much higher than I’d ever seen anywhere”, Smith says. “It’s unbelievable. People with masters’ degrees in functions that do not need a master’s degree. PhDs.” This can make it a challenge “to design things that are relatively straightforward… To me, we need to dumb down some of the departments, because the company is way too complex.”

Smith stopped his own formal education with a bachelor’s degree in economics. He says he “can’t keep up with some of these people” but at the same time finds them out of touch with customers. “I tell them, ‘Go spend a day at the airport, go fly a competitor and see what it’s like.’ ”

He plans to invest €20 billion over the next five years in Air France-KLM. Much of that will go to renewing its 500-strong fleet. Like most airlines, it is comprised of both Airbus and Boeing aircraft, because companies do not want to be hostage to a single manufacturer.

The fact that Airbus is European and Boeing American has nothing to do with his choice, he says. “It’s technology,” he said. “From an Air France-KLM perspective, the first priority for us is the size of the airplane, to renew part of the Air France A320 family. Right now we have 117 A318s, 19s, 20 and 21s. It’s the same family of airplanes, and for Air France, the natural choice, with or without the Max situation, is the Airbus A220.”

On January 21st, Boeing confirmed it has temporarily stopped building the 737 Max, its best-selling plane. The Max was grounded last March, after two fatal crashes that killed all 346 people on board. Airbus continues to accumulate big contracts because of Boeing’s misfortune.

Air France-KLM confirmed its €5 billion order for 60 narrow-bodied A220-300s in December. Normally, the company would consider Boeing as well. The criteria would be price, commonality and simplicity, Smith said. But in this case “there is no comparable option with Boeing. So, for us, there was really only one choice.”

Smith says the company is “very happy” with its Boeing 700s, 800s and 900s. It had intended to order the 737 Max for Transavia, but was prevented from doing so by a pilots’ strike. If the 737 Max regains certification, he would consider the aircraft, but only if pilots, employees and customers felt comfortable flying on it.

“Renewing our fleet is a very quick and effective way to significantly reduce our carbon footprint,” Smith says. The company comes under a great deal of pressure to do so, from governments, customers and its 88,000 employees.

Airlines pay high fines for greenhouse gas emissions. “If you want to impose a tax on us, our ask is, put that money into R & D that can help us run a more efficient, less [climate] impactful business,” Smith says. “Or don’t reduce our incomes, which is holding us back from buying more modern airplanes.”

I ask Smith if the Swedish climate activist Greta Thunberg, who travels by boat and train rather than flying, will put the airlines out of business.

“Have you reduced your flying?” he asks. “There’s this added pressure to reduce our industry’s carbon footprint, but we don’t see a decrease in demand. There are parts of the world where we are still seeing enormous increases in demand for air travel, so we have a huge responsibility.”

Ben Smith: who is he?

The son of an Australian father and a Hong Kong Chinese mother, Smith ran his own travel agency for eight years after obtaining a bachelor’s degree in economics from the University of Western Ontario. He joined Air Canada in 2002 and became its second-ranking executive.

Air France recruited Smith, its youngest and first foreign chief executive, in 2018. He moved to Paris with his husband and their young daughter. Now age 48, Smith’s performance-related salary is estimated at €4 million.

What has he accomplished?

What is Air France-KLM?

The French and Dutch national flag carriers merged in 2004. Their partnership has been rocky, with the Dutch accusing Air France of dragging down profit margins.

France owns 14.3 per cent of the group, the Netherlands 14 per cent. Delta and China Eastern are the next shareholders, with close to 9 per cent each.

What is left to do?

Smith is more closely integrating Air France and KLM fleets, management and training, and strives to reduce the income gap between the two airlines.

His five-year strategic plan includes €20 billion in investment. He aims to raise profit margins from 5 per cent (in 2018) to between 7 and 8 per cent. He wants to pay shareholders dividends in 2022 for the first time since 2008.

Air France lost €189 million on domestic flights in 2018. Smith will shift emphasis to premium business travel, the most profitable segment of the market.