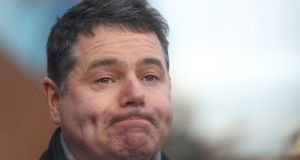 Minister for Public Expenditure and Reform Paschal Donohoe said private sector employers would be ‘encouraged’ to allow staff work beyond 65.

If pensions are making the radar of core issues in a general election, politicians have only themselves to blame.

All parties report that canvassers have been getting it in the ear over the gap between the age at which many people are forced by employers to retire, 65, and the age at which they can access the State pension. This stands at 66 but is due to rise to 67 next year and 68 in 2028.

But the gap is no accident. The Fine Gael-Labour coalition that enacted the changes almost a decade ago were fully aware thousands of people would fall into this limbo between employment and retirement income. So, too, the previous Fianna Fáil-Green-Progressive Democrat grouping that signalled the unsustainability of continuing to fund the State pension from the age of 65.

And all have been on notice for many years that as many as four in 10 private sector workers are relying solely on the State pension for their retirement income.

They simply chose to ignore it. A 2016 Interdepartmental Group on Fuller Working Lives report flagged the “anomaly”. Minister for Public Expenditure and Reform Paschal Donohoe – he hadn’t assumed the Finance portfolio back then – said private sector employers would be “encouraged” to allow staff work beyond 65. What happened since to encourage such flexibility? Precisely nothing.

Could it be that the lack of urgency on addressing the lacuna into which so many workers will fall had something to do with the fact that neither the political masters enacting policy nor the public sector mandarins proposing it were ever likely to find themselves in the position?

If politicians deserve any sympathy, it is that they never saw this coming. There has been no groundswell of protest since 2011 when it was announced and legislated for. It proves only that no one cares really about one of the most important financial issues until it looms before them. The 2021 deadline appears to have sharpened focus somewhat.