No digs at Davos? Shivering to highlight homelessness 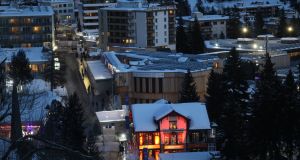 Snow topped buildings stand in the town ahead of the World Economic Forum in Davos, Switzerland.

Andrew Funk has been shivering through the nights in a tent pitched in the snow of Davos this week as political and business leaders returned to their cosy hotels and apartments nestled in the swank Swiss ski resort.

Funk, who heads Spanish charity Homeless Entrepreneur, has spent his days trawling the annual meeting of the World Economic Forum (WEF) hoping to make contacts and highlight the plight of people without places to live around the world.

“We’re sleeping out in Davos because we believe that there are decision-makers here that need to, instead of think differently, they need to act differently to end homelessness,” he told Reuters.

Sitting in his tent, Funk said night-time temperatures since his arrival in Davos had dipped to -17 degrees but that the chance to lobby delegates was worth it.

Born in the United States and now living in Barcelona, Funk says he was homeless for a time, hopping from sofa to sofa.

He made his first visit to Davos two years ago, turning up with nowhere to stay and no clue how harsh the conditions would be. He and two friends now sleep in a teepee which in the daytime serves as a shelter for children when they’re skiing.

The conditions are harsh, with a freezing draught, and passing noises which make sleep near impossible.

“Sleep is not the right word. We rest every once in a while ... You see car lights going by and you don’t really know what to expect. That level of insecurity, of the unknown, exists. This happens to homeless people all the time,” he said.

His charity focuses on the skills of homeless people to get them back on their feet through a mentoring programme where they are advised by volunteers on issues from housing to health.

The aim in coming to Davos is to meet delegates and raise funds, but also to get people talking about homelessness, he said. – Reuters