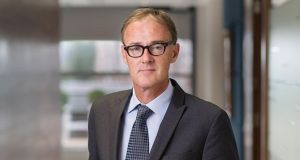 A ripple of disbelief ran around Dublin’s business elite on Wednesday, after The Irish Times revealed Goodbody Stockbrokers managing director Roy Barrett was set for the chairperson’s role at the Football Association of Ireland.

Why would the head of a heavily regulated entity (currently in the process of a €150 million takeover process, remember) want to step into the roaring dumpster fire that is the FAI, caught up in the biggest corporate governance scandal the country has seen since the heady days of the financial crisis?

But step he did. Minister for Sport Shane Ross couldn’t have been more pleased with the appointment. Barrett has 25 years’ experience running a highly regulated business (hold the jokes about the effectiveness of financial regulation, please), and all the corporate governance palaver that follows. While he hasn’t been a frontline dealmaker for a while, he will have the savoir faire to assist in the FAI’s financial woes. He should also be able to assist in bringing in sponsorship deals, being no stranger to talking money out of corporate pockets.

However, Barrett’s well-known allergy to publicity may be hard to maintain. The FAI is coming out of a dark period for transparency, when journalists were frozen out for asking the right questions. And it’s not just hacks, there are real people involved too. The “football family” will need consulting at every step. Much of the board is effectively elected by the grassroots.

This is the same base that John Delaney courted so effectively, and it still wields collective power. He needs to publicly articulate his plans to these people, many of whom have a genuine, good faith concern for the game’s welfare. And that’s before we get to the Oireachtas, which will also come looking for its pound of flesh.

Barrett’s plan seems to be to entice Niall Quinn into the chief executive’s role, the logic being that such a brightly burning flame will hold public attention. But even if he pulls that off, Roy should prepare for closer attention. Being king of all you survey in Ballsbridge is not the same as the dogfight out in Abbotstown.