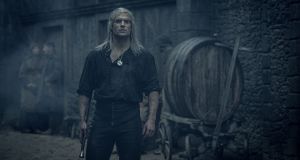 Google hit: Henry Cavill as Geralt of Rivia in Netflix series The Witcher.

Streaming leader Netflix fervently believes that there is room for Disney+, Apple TV+ and other new entrants to the subscription video-on-demand market that Netflix has dominated up to now. All can grow, or continue to grow, at the expense of poor old linear television, it says.

Sometimes Netflix has an interesting way of showing it’s not bothered though. In its latest letter to shareholders, it slipped in a metric more usually found in internal presentations: Google Trends.

“As an example” of how it can continue to prosper, Netflix displayed a chart showing how global online searches for its series The Witcher managed a far more impressive spike than that recorded by three rival shows, including The Mandalorian, the Disney+ Star Wars spin-off series featuring none other than Baby Yoda.

Its own footnote reveals one reason why The Witcher’s search margin was so wide: while the fantasy epic starring Henry Cavill was available everywhere Netflix is available (some 190 countries), so far Disney+ is only in the US, Canada, Australia and New Zealand. When Disney+ launches across western European markets including Ireland on March 24th, The Mandalorian will arrive with months of Baby Yoda hype in the bag.

That’s not to say that The Witcher wasn’t a hit for Netflix. According to the platform, some 76 million households – staggeringly, almost half of its worldwide subscriber base – chose to watch it in its first four weeks of release.

This is based on Netflix’s newly adopted measurement method in which subscribers only have to watch two minutes of a film or episode to be counted as a viewing household. Before, households had to watch 70 per cent of the title to be included in the statistics.

At this point, it becomes almost mandatory to state that Netflix’s figures are not independently verified. But perhaps it’s worth remembering that before December 2018, Netflix gave no numerical indication of the popularity of its content at all. It used to argue that only subscriber trends and totals were important. Now, it seems, there’s space for a much wider array of data, which investors are free to interpret as they wish.