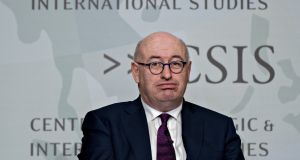 Fresh from his appointment as EU trade commissioner, Phil Hogan made his first trip to Washington as Europe’s top trade official this week.

There was much talk of “resetting” the EU-US relationship as Big Phil arrived in the US capital.

Transatlantic relations are at a low point since Donald Trump’s election – steel and aluminium tariffs have been in place since 2018, with the EU retaliating with its own tariffs on American products, though so far the US has not targeted European cars.

Tensions over two parallel World Trade Organisation rulings on illegal subsidies to Boeing and Airbus rumble on, with Hogan making it clear that Brussels will sanction US products if the WTO finds that the US subsidised Boeing, as expected in May or June, if a compromise is not reached in the meantime.

The commissioner was also flying the flag for France, which is facing punishing tariffs amid US fury about its digital tax.

The commissioner is expected to meet US president Donald Trump at Davos next week. No breakthrough was achieved on tariffs, but as Hogan told reporters before his departure on Thursday, he didn’t expect to reset the relationship “in a few days”.

Nonetheless, he said he was very happy with the level of engagement, and plans to return in February and March.

He did ruffle some feathers, however, taking a swipe at the newly minted “phase one” China trade deal signed by Trump on Wednesday.

Noting that 20 per cent tariffs were still in place, he suggested its benefits might be political rather than economic.

“In the short term, it might work between now and November . . . [as a] politician, I understand the way it works.”

However, Hogan’s move to sign a trilateral agreement with Japan and the US this week calling for the WTO to address industrial subsidies – a clear dig at Beijing – was canny. Persuading the US the EU shares its concerns over China could be the way to convince Trump that working with the EU on global trade issues is in everyone’s interests.