Expectations are ECB will revive stimulus 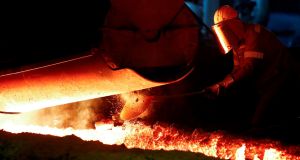 German steel worker at the ThyssenKrupp AG works in Duisburg.

A key gauge of the health of Germany’s manufacturing industry sank by far more than expected in May, amid a steep drop-off in foreign demand that is hitting factories across the euro zone and raising expectations that the European Central Bank will revive its crisis-era stimulus.

Manufacturing orders in Germany dropped 2.2 per cent month-on-month in May, and were down 8.6 per cent from the same month in 2018. A Reuters poll of economists had forecast a fall of 0.1 per cent.

The publication of the data sparked a fresh fall in government borrowing costs as markets priced in the likelihood of more monetary easing from the ECB. Germany’s 10-year Bund yield traded near historic lows of minus 0.4 per cent on Friday, after the release of the data.

The global trade slowdown has dealt a severe blow to manufacturers in the single currency area, with Germany’s €1.6 trillion export machine being hit particularly hard. A poll of purchasing managers published this week suggested that levels of activity had continued to shrink in June.

“Today’s figures do not bode well for the short-term prospects for the German economy,” said Ralph Solveen, an economist at Commerzbank, who added that the report underlines “our expectation that the German economy shrank in the second quarter and that hopes of a noticeable improvement in the third are dwindling”.

The scale and duration of the problems have raised fears among policymakers that the woes of the region’s factories will begin to infect other parts of the economy, including the dominant services sector that is more reliant on domestic demand.

The wider economy has held up well in the face of the manufacturing slowdown; unemployment in Europe’s largest economy is close to post-reunification lows. But there are signs the German labour market is weakening, although the evidence is inconclusive.

Any increase in unemployment is likely to weigh on consumer spending.

“German factory orders have brought us closer to ECB action at the July meeting,” said Carsten Brzeski, economist at ING. “If industrial data next week are equally dreadful, it is hard to see the ECB not acting. Mr Draghi increased expectations so strongly that no reaction to another set of disappointing data would be counter-effective.”

In a sign of how far investors’ expectations of central bank action have shifted, the market value of negative-yielding debt globally this week reached a record high of $13 trillion, according to data from Barclays.

The figure represents a dramatic increase from $8.3 trillion at the end of last year. The negative yield means that investors who purchase the Bunds and hold them to maturity will receive less in repayment and regular coupon payments than their initial investment.

Germany’s factory sector has been among the hardest hit by the sharp slowdown in global trade stoked by the US-China trade war. Sluggish growth across some of its major trading partners, such as Turkey, has also weighed on what was until recently the euro zone’s economic powerhouse.

Foreign orders at German manufacturers slumped 4.3 per cent in May, on a month-over-month basis, according to surveys of purchasing managers. Orders from the euro zone were off 1.7 per cent, and those outside the zone tumbled 5.7 per cent. Domestic orders rose 0.7 per cent.

“Manufacturers have, at least according to the PMIs, been able to maintain production growth in excess of the flow of new orders recently by clearing work backlogs,” said Claus Vistesen, chief eurozone economist at Pantheon Macroeconomics. “But that can’t go on indefinitely.” – Copyright The Financial Times Limited 2019