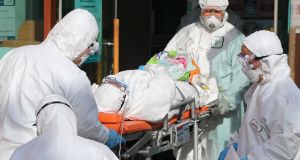 The slump in euro zone manufacturing activity eased in February, defying fears of a deterioration due to the coronavirus outbreak, while the dominant services sector remained resilient pushing business activity to a 6-month high.

The manufacturing purchasing managers’ index for the euro area rose to 49.1 in February, up from 47.9 in the previous month and above analysts’ expectations of 47.5. While this is still below the 50 mark, indicating a majority of businesses still reporting a contraction, it is still the highest value since February 2019.

Chris Williamson, chief business economist at IHS Markit, said the region’s economy picked up momentum “despite many companies having been disrupted in various ways by the coronavirus”. He added the impact of the disease had caused supply problems, and showed some signs of hitting travel and tourism numbers.

The euro rose following the release of the figures, to trade 0.3 per cent higher at $1.081, while European stocks marginally recovered some of their earlier losses.

“To the extent that markets and forecasters were coming into this release with fears of a virus-hit, those fears have been convincingly dispelled, at least for now,” said Claus Vistesen, chief eurozone economist at Pantheon Macroeconomics.

The improvement in manufacturing reflects an easing of a prolonged slump in Germany, the region’s largest industrial producer and the eurozone country most exposed to China. In contrast, factory activity deteriorated in France.

Germany’s improved PMI reading of 47.8, up from 45.3 in the previous month, surprised investors that expected the country to take a more significant hit from the coronavirus.

“The small increase in the eurozone composite PMI was a big surprise. This should at least temporarily put to bed worries over an imminent recession in Europe,” said Oliver Rakau, chief German economist at Oxford Economics. Still, he warned that “the fragility of global supply chains means that even small disruptions in China could spell large repercussions for Europe down the line”.

The slower pace of decline in German factory activity was largely the result of new domestic orders, while foreign orders fell markedly, and at their fastest rate for three months in February.

German goods producers reported “a slump in both exports and sentiment, linked to the impact of the coronavirus on activity in China and the wider region”, according to the report.

The eurozone’s dominant services sector remained resilient with its PMI reading rising to 52.8 in February from 52.5 in the previous month, which pushed the composite index marginally up to 51.6, its highest reading since August. – Copyright The Financial Times Limited 2020