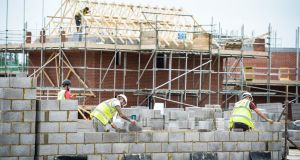 The difference in living standards between rich and poor regions in practice may not be quite as high as the headline figures suggest, because housing is typically a lot cheaper in poorer regions. Photograph: Ben Birchall/PA

In Germany, for example, incomes in Hamburg, the richest region, are about 120 per cent of the national average income per head, compared to 70 per cent in its poorest region.

The Dublin region, which has less than 30 per cent of the population, pays about 40 per cent of all taxes on income

Ireland’s regional inequality before taxes and benefits is rather similar to Germany’s. While our tax and benefit system is among the best in the EU for modifying inequality between individuals’ incomes, it is less successful than Germany’s in reducing regional disparities.

It’s easier to see why our system is better at reducing income inequality between individuals rather than regions – we pay flat-rate benefits, with allowances for dependants, where German welfare payments are generally related to prior earnings and there are no specific additions for spouses or children

While Ireland’s welfare payments form a higher share of incomes in poorer regions, inter-regional differences are limited. Instead, it is our tax system that plays the biggest part in redistributing incomes between regions. Because average incomes are much higher in Dublin, the average tax and PRSI payment is 140 per cent of the national average, whereas in the Border region it is only two-thirds.

As a result, the Dublin region, which has less than 30 per cent of the population, pays about 40 per cent of all taxes on income. However, the difference in living standards between rich and poor regions in practice may not be quite as high as the headline figures suggest, because housing is typically a lot cheaper in poorer regions.

As taxation plays a significant role in reducing regional disparities in income, and in redistributing money from Dublin to the rest of the country, if a new government cut taxes on income or property it would blunt the effectiveness of this important mechanism for regional redistribution.

In terms of disposable income per head, with just three-quarters of the national average, Donegal is the most disadvantaged county in the Republic.

The underlying issue is that incomes per head are low, and this is only partly counterbalanced by receiving a higher-than-average share of welfare payments, and paying only half the national per capita tax on income.

Donegal’s economy is tied up with the fortunes of Derry, its nearest major city. Decades of underinvestment in Derry, particularly in higher education and transport infrastructure, have affected its prosperity, with spillover effects in Donegal.

The Northern Ireland Executive’s new programme for government commits to increased spending on Derry’s deficits in social and economic infrastructure, with the Irish Government likely to make a contribution. If Derry thrives as a result, it would also give Donegal a boost.

While tax is an important mechanism to redistribute income across the country, a better long-term solution is to raise economic activity and productivity across the regions, which will translate into more evenly distributed pre-tax incomes.

The National Planning Framework calls for future investment to accelerate growth in Cork, Limerick, Galway and Waterford. Stronger regional economic centres, with a critical mass, can help reduce differences in average income per head across the regions. In turn, this could also moderate the pressures leading to sky-high housing costs in Dublin.

Another measure of living standards is access to public services. Across the EU, cities, especially capitals, spend more on public services – on the civil service itself, and on services like health and education. If we include the greater Dublin area, and not just the city itself, Ireland’s spending on public services is not particularly skewed towards the capital – it’s less so than in Germany, and significantly less so than for London.

Unsurprisingly people in urban areas live closer to schools, hospitals and transport hubs, although for some services like primary schools or Garda stations, the average difference in distances between urban and rural areas are quite small, according to census figures.

On average, Dubliners live 8km from a hospital, compared to 31km in the Border region, but in this case distance is not the most important metric. As I argued last week, concentration of medical expertise in fewer locations can save lives, as the cancer strategy has shown.