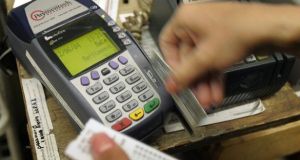 Most sectors showed an increase in expenditure with hotels, restaurants and bars spend jumping 4.9 per cent

Consumer spending was unchanged last month having risen slightly at the end of 2019, new figures show.

Visa’s Irish Consumer Spending Index shows household expenditure fell by 0.1 per cent after rising 0.9 per cent in the prior month.

Ecommerce expenditure was little-changed following a strong increase during December, which was largely due to a boost from Black Friday and Cyber Monday sales. Face-to-face sales were also muted.

Most sectors showed an increase in expenditure with hotels, restaurants and bars spend jumping 4.9 per cent.

“Levels of consumer spending were muted at the start of the year, reflecting a trend we have seen in recent months where growth in expenditure has plateaued. The fractional reductions in both face-to-face spending and online purchases in January reflect the fact that the majority of retailers begin their sales in December now,” said Philip Konopik, Ireland country manager for Visa.