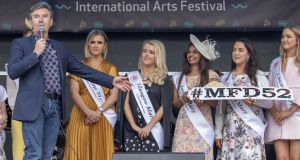 Daniel O’Donnell welcomes the Mary from Dungloe contestants on stage during a concert. Ireland’s bid for a seat on the UN Security Council in 2011 might have been helped by his popularity in certain small countries. Photograph: North West Newspix

Twenty years ago I was asked to talk to a senior Australian politician about the Celtic Tiger. I recounted the vital role played by European Union membership, investment in education and the role of foreign investment.

At the end of the talk he asked me what role Irish music had in the success story. I was rather taken aback as music had not figured in any of my economic models. While culture and the arts have a profound importance, which goes beyond the economic, it’s also good to acknowledge that they play an important indirect role in economic development. And economic value is not confined to high art, but also to popular cultural exports – Binchy as well as Beckett.

In my student travels in Europe in the late 1960s, I often encountered blank looks when I said I was Irish. Many people had never heard of Ireland, thought it was still part of the UK, or even Iceland. A small minority knew something of Ireland through the work of Joyce, Yeats or Heinrich Böll.

With EU membership, Ireland’s profile began to rise. But music from Ireland began to really put us on the map with European citizens. From 1970 onwards, Eurovision success with Dana, Johnny Logan and others brought Irish popular music to an audience of millions, with the wildly successful Riverdance the high point of our Eurovision adventures. Westlife, the Cranberries, and of course U2 reached global success – I was gobsmacked to see posters for a Westlife concert in Hanoi.

Irish traditional music and Celtic rock, with bands such as the Chieftains and Horslips became hugely popular on the continent.

In the 2001 Irish campaign for a seat on the United Nations Security Council, our ambassador in Beijing had to canvass votes across the South Pacific. In tiny countries such as Tuvalu, key figures knew little about Ireland, but they knew Daniel O’Donnell, which may have swung us a few important votes.

The reputation of Irish musicians has helped open doors for us abroad, not only in the diplomatic sphere. By fostering valuable name recognition and Irish identity, they have paved a way for Ireland’s exporters to expand their markets.

An established Irish cultural identity has also been part of our success in attracting skilled migrants to work here. ESRI research has shown that such talent has played an important role in our economic advancement from the mid-1990s onwards. People in the IDA and other agencies reported that, for young mobile talent in Europe, Dublin or Galway were much more attractive destinations than Birmingham or Bremen.

From across the EU, young people with specialist skills chose to migrate to Ireland, attracted more by the pull factor of Ireland’s cultural buzz, rather than a push factor of domestic economic difficulties. Whether it was Irish popular music, or the popularity of trad music, this was part of the attraction. This “asset”, which the Australian politician had raised with me, was not something that had been planned, or even required state funding. It just happened.

In a 1999 report with ESRI colleagues for the Department of Finance on investment priorities, we looked at some of the factors affecting economic success among Irish cities.

We mentioned, in a not very scientific way, that part of Galway’s allure may have been that it had two very successful theatre groups. To the relief of the department, we didn’t recommend establishing theatre groups in every city, but rather that our cities should each forge their own path to become more attractive for their own citizens, and to attract others to live there – socially and culturally vibrant cities are the more economically successful.

Liverpool is a good example of a city which used cultural development to spearhead a wider economic renaissance. Economically depressed for a long time, it used its position as European Capital of Culture as a springboard for an economic and social comeback, turning it into a thriving and attractive city to live in, work or visit.

Ireland’s Ancient East branding is designed to reap the value of cultural heritage for tourism. But a real weakness of our efforts in that respect has been our failure to pursue and secure Unesco world heritage status beyond two sites: the Skelligs and Brú na Bóinne.

A more active strategy to harness the value of Irish culture for economic ends could reap rewards not just for the wider economy, but it could help raise the living standards of our artists.