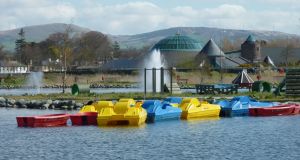 A water attractiion at the Acqua Dome waterpark in Tralee, Co Kerry

The directors of Tralee Aqua Dome in Co Kerry have warned that it could close if if insurance claims against the facility grow.

This warning is contained in new accounts which show that Tralee Waterworld plc recorded a pre-tax profit of €73,511 in the 12 months to the end of April last.

Revenues at the facility, which is owned by local shareholders, rose by 5 per cent to €1.23 million.

The directors’ report in the accounts stated that “insurance claims against the company are an ongoing concern, which, if they continue to grow, could eventually lead to the closure of the facility”.

Aqua Dome chief executive Kieran Routledge said it was a continuing battle to keep the waterpark open, especially as it only makes a profit during the summer months.

Mr Routledge said the Aqua Dome faces a significant problem given the high level of personal injury awards for minor injuries. He said the cost of dealing with claims has prevented the Aqua Dome from developing further.

“We could be twice the size or we could drop the admission prices but for the insurance costs,” he said.

He stated that the

The directors’ report warns that “successful claims up to the excess amount for a number of consecutive years would pose a significant risk to the business.”