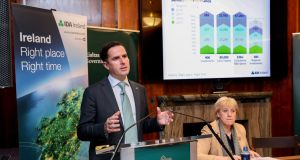 The €26,125 spend on flights and €19,012 spend on hotels arose as Mr Shanahan made multiple trips overseas as part of the IDA’s remit to attract inward investment from overseas companies.

Separate figures provided by Enterprise Ireland show that its own outgoing CEO, Julie Sinnamon, ran up a combined overseas hotel and flight bill of €21,216.

“The nature of IDA Ireland’s business is international,” the IDA said. “FDI is won in the market and as such necessitates extensive travel by IDA executives, including the CEO, throughout the year.

“A central part of Martin Shanahan’s role is to meet with the decision markers in existing and potential client companies across the globe.

“These face to face meetings play a vital role in building strong business relationship with leading international companies in order to win investment to Ireland.”

The response added that IDA Ireland has strict travel policies in place to govern travel by executives in line with public sector policies.

“The approved class of travel is dependent on a number of factors including the length of flight and intensity of itinerary at the destination country,” it said.

The IDA declined to provide a breakdown of Mr Shanahan’s flight and hotel details “as this could indicate the frequency and duration of the CEO’s visits to overseas locations and would be commercially sensitive to IDA Ireland as we are competing for FDI in a global market”.

“This information could also adversely impact the financial and economic interests of the State if it was released as it would indicate locations of IDA focus when attracting and expanding FDI in the State,” it added.

The costliest overseas venture for Ms Sinnamon was a trade mission to New Zealand where the cumulative cost of eight flights came to €6,589 where hotel costs totalled €1,683.