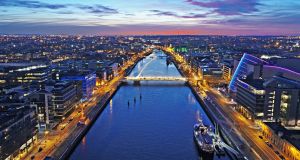 EY expects the Irish economy to grow by 3.4% this year. Photograph: iStock

The economy will grow by 3.4 per cent this year before moderating in the years to come, professional services firm EY said as it revised its forecasts upwards in the aftermath of an election which delivered no clear signals on how government formation will proceed.

In any event, EY suggested that whatever government emerges, the domestic economy will be supported given desires among most parties to accelerate spending on infrastructure and the hiring of public service workers.

In line with this growth, EY expects job numbers across the island of Ireland to increase by more than 192,000 over the coming five years. That will put pressures on other areas of the economy, such as housing.

While house prices fell 0.9 per cent in Dublin last year, EY chief economy Neil Gibson said the “conditions are there for a return to price growth”, given the scale of inward migration to the Republic and the fact that about 21,000 houses were completed in the State last year.

“The signals are not there for overheating,” however, Mr Gibson said, adding that if it was, we’d see very fast pay rises or high inflation, neither of which are currently happening.

“One thing helping to avoid overheating is the fact that there are some slowing pressures outside of Ireland’s control such as the global economy.”

On the election results, Mr Gibson said it was striking that the incumbent government couldn’t secure a majority with “headline growth rates of well over 5 per cent”.

“This speaks to a long-standing disconnect between headline growth and the citizen experience. Regardless of the shape of the next government we are likely to see a focus on public services, quality of life and what can be characterised as more internal, or personal outcomes rather than a singular drive for growth and globalisation,” he said.

Asked about the counter cyclical nature of many parties’ spending proposals, he said it “worries all economists”.

“If you could run the economy in a lab this is not what you would do . . . You never want to be spending when an economy is growing so strongly but you can’t look at citizens’ lives and say that’s not part of the equation.”

Mr Gibson posited that a new government would slow down spending in other areas but, “having had a decade of austerity, that’s not easy to do”.

We do, however, “have to find a way” to make a dent on the national debt, Mr Gibson said.