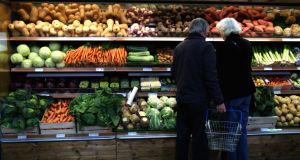 The group said consumer spending and a bounce in business investment would drive growth.

The domestic economy will grow by 3.6 per cent this year but challenges including Brexit, corporate tax reform, and housing will remain a threat, according to a report by Goodbody.

The group, in its “health check” of the economy, said consumer spending and a bounce in business investment would drive growth to outstrip the rest of the euro zone.

The report said Ireland faces threats to its economic model over the coming years such as the impending changes to the international corporate tax environment, and called on policymakers to “rapidly focus” on both infrastructure and human capital.

On Brexit, the report said “significant risks” still exist about the shape of any future trading arrangement with the UK after the end of the transition period on December 31st.

“It remains to be seen at which speed the EU/UK trade negotiations progress, but we do not believe a comprehensive trade agreement can be signed in time for the end of the transition period,” it said.

“Thus, an extension will be needed in our view, which is currently in direct contradiction to the current position of the UK government. Renewed uncertainty is likely before this issue is resolved.

“The UK government has continued to insist that it will not seek an extension to the transition period. This policy may change, but as it stands it is highly unlikely that the UK and the EU will have the time to negotiate a deep and wide-ranging free-trade agreement to ensure that there will be minimum trade dislocation on January 1st, 2021.

“However, we expect some near-term bounce in business investment in the first half of the year reflecting some pent-up demand and the avoidance of a hard Brexit at the end of this month.”

On services after Brexit, the report said the picture was more nuanced. “While Irish companies may find it more difficult to trade with the UK, this is offset somewhat by the prospect of Ireland attracting firms currently operating from the UK,” it said.

In relation to housing, the report said supply had “grown substantially” in recent years with 21,500 units completed last year, representing a year-on-year increase of 19 per cent.

“Despite more than a fourfold increase since the trough, supply has not caught up with household demand yet,” it said.

“However, we believe that the performance of the market in 2019 highlights the importance of price and affordability in clearing the market. In the context of the mortgage rules, affordability can be defined as 3.5 times gross income.”

On employment, the report noted that Ireland is close to full employment and is currently experiencing a skills gap with an influx of “high-skilled migrants” needed to deal with the issue.

“In the context of tight labour markets globally, this is becoming an ever-more difficult task,” it said.

“However, with EU migration to the UK falling in the aftermath of its decision to leave the bloc, Ireland could potentially see a diversion of this flow. This could be an important source of labour that may ease some of the wage pressures.”