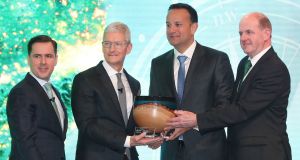 IDA Ireland chief executive Martin Shanahan sees slowing growth and the advent of an international digital tax regime as potential challenges for the State over the coming years in securing foreign direct investment, following record levels of activity in the past five years.

Speaking to The Irish Times on the fringes of the World Economic Forum (WEF) in Davos, Mr Shanahan noted that global growth projections are coming down, with the International Monetary Fund (IMF) shaving its forecasts this week for 2020 and 2021.

“If that is the case, you are likely to see more subdued levels of FDI,” he said on Wednesday, referring to foreign direct investment. “So, we might be fighting for a smaller pool that’s coming into Europe.”

Mr Shanahan highlighted rising protectionism as another issue, though he said the phase-one trade agreement reached between the US and China last week following an 18-month stand-off “is obviously welcome”.

“Changes to global taxation are potentially a challenge, but it’s too early to say whether they are or not,” he said.

However, Mr Shanahan, who is hosting an annual IDA dinner in Davos on Thursday for executives from overseas companies based in Ireland and prospective clients, said the current pipeline of activity is strong.

Minister for Finance Paschal Donohoe said on Tuesday that corporate tax revenues will probably take a €2 billion hit as the Organisation for Economic Co-operation and Development (OECD) seeks to secure international agreement to ensure large multinationals, including digital companies, pay taxes where they have significant sales.

“We believe it is difficult to design a tax that captures solely what some people might perceive as digital. We have also been clear that this is best dealt with on a multilateral basis, and not individual countries going their own way on it. And that multilateral basis is the OECD.”

He added: “I think we’re a bit away from where that will land. There has to be political consensus in the first place, and that’s obviously a challenge when you’re talking about the number of countries involved.”

Also in Davos on Wednesday, the French finance minister Bruno Le Maire said France would maintain its plan for a digital tax if no OECD agreement is reached.

Meanwhile, Mr Shanahan defended the agency awarding Apple with its inaugural special recognition award for FDI in Ireland earlier this week, at a time when the iPhone maker’s Irish tax affairs are the subject of EU court proceedings. The Government and Apple are currently appealing a European Commission decision that the technology company received €13 billion of alleged tax aid in Ireland.

“It’s a company that has been in Ireland for 40 years and has invested and reinvested and reinvented itself in Ireland in terms of the activities that it does here,” Mr Shanahan said. “It employs 6,000 people in the State. If that isn’t something which we should mark and celebrate, I’m not sure what is.”

1 How well paid do you think you are? Here’s how to work it out
2 Life as a Facebook moderator: ‘People are awful. This is what my job has taught me’
3 Public could face extra charge for electricity under green subsidy scheme
4 AIB to sell more than 500 ATMs to Brink’s
5 Wealthy investors’ legal challenge against Revenue fails
6 Flight attendent seeks High Court injunction against Aer Lingus
7 Coronavirus and the etiquette of working from home
8 Wall Street hammered on coronavirus fears while Dublin dips 4%
9 New 24-storey tower for Cork city approved despite council concerns
10 Why Irish savers should forget about banks
Real news has value SUBSCRIBE