Trump holds America up as ‘example for the world’

US president takes swipe at environmental ‘prophets of doom’ in Davos

US president Donald Trump has addressed the orld Economic Forum in Davos, claiming that America is "winning again like never before." Video: WEF 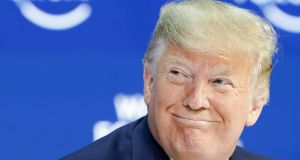 US president Donald Trump held up his country before the World Economic Forum in Davos as an “example for the world”, as he listed a series of economic accomplishments under his first three years in power.

Speaking hours before the US Senate was set to begin his impeachment trial, Mr Trump also used his keynote address at the opening of the annual conference in the Swiss Alps to take a swipe at environmental “prophets of doom” as teen activist Greta Thunberg looked on.

He did not refer to the impeachment proceedings during his speech.

“America’s economic turnaround has been nothing short of spectacular,” Mr Trump said, as he took credit for his policies leading to Wall Street stock indices surging to all-time highs, unemployment falling, wages rising and female participation in the workforce increasing under his administration.

“Today I hold up the American model as an example to the world as a working system of free enterprise,” he said as he called on other countries to follow his example in rowing back on regulation.

Mr Trump said that the benefits of his efforts to cut bureaucracy - “for every new regulation adopted, we’re getting rid of eight” - and last week’s agreement on a US-China phase-one trade deal and the US senate backing a new US-Mexico-Canada pact will be felt by citizens towards the end of the year. He is seeking re-election as president in November.

The US president said he looked forward to negotiating a trade deal with UK prime minister Boris Johnson following Brexit.

With climate change at the heart of the this year’s WEF, Mr Trump rejected environmental “prophets of doom and their predictions of apocalypse”.

“They are the heirs of yesterday’s foolish fortune tellers,” he said. “They want us to do badly. But we won’t let that happen. They predicted an overpopulation crisis in the 1960s, and starvation in the ‘70s and an end of oil in the 1990s.”

Mr Trump also used the occasion to also attack the Federal Reserve for raising rates “too fast” in recent years and lowering them again “too slowly” in 2019.

Two years’ ago, Mr Trump used his first visit as president to the WEF to reassure participants at the four-day gathering of almost 3,000 business and political leaders, academics and journalists that his “America first” agenda did not mean “America Alone”. The annual event is seen as the home to “globalists” and elites, who the president has raised against while pushing a trade-protectionist agenda.

The impeachment trial of US president Donald Trump on the Republican-controlled Senate is due to begin later on Tuesday in Washington.

The president is charged with abusing the power of his office to pressure Ukraine last year to investigate political rival Joe Biden, and his son Hunter, who served on the board of a Ukrainian gas company while his father was vice-president. Mr Trump is also accused of obstructing US congress’s efforts to look into his conduct.

A majority of two-thirds of senators is required to remove Mr Trump from office, a bar that is unlikely to be reached given how the Republican party has aligned itself behind the president.

Mr Trump tweeted a number of times during his overnight flight from the US to Switzerland, stating in one that his mission at the WEF was to “bring GOOD POLICY and additional Hundreds of Billions of Dollars back to the United States of America! We are NUMBER ONE in the Universe, by FAR!!”

Mr Trump’s officials had set up a number of meetings for the president at Davos, including a first sit-down with Iraqi president Barham Salih since tensions erupted over the US killing Iranian general Qassem Soleimani earlier this month in an airstrike in Baghdad.

The US president is being accompanied by a delegation that includes treasury secretary Steven Mnuchin, commerce secretary Wilbur Ross, White House advisers Ivanka Trump and her husband Jared Kushner, as well as other top officials.

1 Bank leaked my loan request to family who tried to rip me off
2 Flight attendent seeks High Court injunction against Aer Lingus
3 Coronavirus: ‘All bets are off’, says aircraft industry chief
4 Wealthy investors’ legal challenge against Revenue fails
5 Solar panels: Are they worth the investment?
6 Johnnie Fox’s sees ‘a few cancellations’ over coronavirus fears
7 Tax burden on Irish households among lowest in EU
8 How to . . . move (almost) everything to your new phone
9 Cosgrave Group in €210m deal to sell 368 Dún Laoghaire properties
10 Can I see my father’s previous wills?
Real news has value SUBSCRIBE