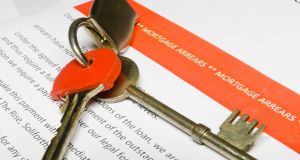 Some 61,802 accounts were classed as being behind on payments, a decline of 5 per cent or 3,241 accounts over the quarter. Photograph: iStock

The number of mortgages in arrears under 90 days fell in the third quarter of 2019, but long-term arrears fell only marginally, new data from the Central Bank shows.

The number of repossessions also fell during the three-month period, with a total of 80 properties taken over by lenders in the third quarter. That compares to 224 in the previous quarter of the year.

The new figures showed mortgage accounts for principal dwellings in arrears over 90 days fell by 1,502 accounts, while those with 720 days or more of arrears fell by only 753. The latter accounts for 45 per cent of all accounts in arrears, and 87 per cent of outstanding balances, at €2.4 billion.

Restructured accounts at end-September totalled 88,587, with 86 per cent deemed to be meeting the terms of their current restructure arrangement.

Overall, the number of mortgages in arrears fell in the third quarter. As of the end of September, there were a total of 742,526 private residential mortgage accounts for principal dwellings in the Republic of Ireland, valued at €97.9 billion.

Some 61,802 accounts were classed as being behind on payments, a decline of 5 per cent or 3,241 accounts over the quarter. The majority of those accounts - 43,518 were in arrears of more than 90 days, just under 6 per cent of all principal dwelling residential mortgages in the State.

Non-bank entities – so-called vulture funds – held 12 per cent of principal dwelling house mortgage accounts outstanding at the end of the third quarter, but accounted for almost half of those in long-term arrears.

These funds repossessed 23 principal residences during the quarter, with 10 voluntarily surrendered or abandoned.

For buy-to let-properties, around 14 per cent of mortgages were in arrears of more than 90 days, a 10 per cent decline over the quarter.