Technology to ‘suck hundreds of billions of tonnes’ of CO2 out of the air does not exist, and ‘perhaps never will’, Swedish teenager tells World Economic Forum in Switzerland 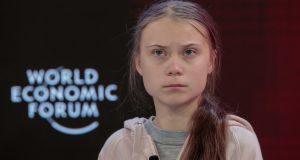 Greta Thunberg, climate activist, pauses during a panel session on the opening day of the World Economic Forum in Davos. Photograph: Jason Alden/Bloomberg

Swedish teen environmental activist Greta Thunberg told an opening session of 50th World Economic Forum (WEF) conference in Davos that the fight to tackle climate change is only beginning, and while the topic is “hot” right now, carbon emissions are not falling.

“Many, many young people from many different places are pushing together to form this alliance of movements. This is a huge step. People are more generally aware now. It seems like climate and the environment is a hot topic right now,” the 17-year-old said.

“But if you see it from another perspective, pretty much nothing has been done. Global CO2 emissions have not reduced. It will require much more than this. This is just the very beginning.”

The teenager, who was named Time magazine’s Person of the Year 2019 in December for her high-profile activism, has been given top billing at Davos, alongside US president Donald Trump, a noted climate-change sceptic, who is also addressing the conference on Tuesday.

Climate change is at the front the agenda of this year’s gathering of global business and world leaders in the Swiss alpine village.

The WEF’s annual risks report, published last week, found that environmental risks, from extreme weather events to businesses and governments failing to mitigate and adapt to climate change, filled the top five places on a list of concerns likely to have a major impact over the next decade. They ranked ahead of geopolitical tensions and cyberattacks.

Ms Thunberg first arrived in Davos last January, a month after coming to prominence internationally with a stirring speech at UN climate talks in Poland, and staged a protest outside the conference grounds about the slow pace of action on climate change.

She subsequently landed a speaking spot at a Davos lunch attended by U2’s Bono, American rapper and record producer Will.i.am and top international executives, and found herself on one of the closing panels, telling participants that “our house is on fire”.

She highlighted how a United Nations Intergovernmental Panel on Climate Change report in 2018 said there was a 67 per cent chance of limiting the global temperature to below 1.5 degrees Celsius, with 420 gigatones of CO2 left to emit in that budget.

“With today’s emissions levels, that remaining budget will be gone in about eight years,” she said. “Richer countries need to get down to zero emissions faster and help poorer countries.

“Most models assume that future generations will somehow be able to suck hundreds of billions of tonnes of CO2 out of the air with technologies that do not exist…and perhaps never will.”

Ms Thunberg deflected a question about how she deals with critics on social media. “I would like to say something that people need to know about more than how I deal with haters,” she said, before outlining how the world is running out of time to address climate change.