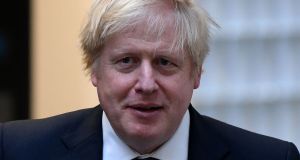 UK prime minister Boris Johnson under severe time pressure to get a trade deal signed before the end of the year when the transition period finishes. Photograph: Daniel Leal-Olivas via Getty

Nearly 90 per cent of Irish business leaders believe the Government needs to “actively address improving relations with the UK” after three years of difficult Brexit negotiations, according to a survey by the Institute of Directors in Ireland (IoD).

“While it is encouraging that the Ireland-EU relationship has held firm during the Brexit process to date and is looked upon with some optimism by directors, it is Ireland’s relationship with the UK that is a cause for some concern and needs to be addressed, after what has been an arduous and challenging Brexit process,” the group’s chief executive Maura Quinn said.

The survey of nearly 300 Irish-based directors also found that nearly double the number of business leaders believe Ireland’s status in a post-Brexit EU will be enhanced (39 per cent) than diminished (20 per cent).

Some 88 per cent are also convinced that Brexit’s impact on the Irish economy will be negative in the short term, while just 6 per cent believe it will be positive.

Two thirds of respondents said that the uncertainty surrounding Brexit has impacted their strategic planning, but the majority say they are prepared.

“Business leaders have told us consistently in our quarterly surveys that they are well prepared for Brexit despite all the uncertainty of the past year, in particular,” Ms Quinn said.

The survey was released ahead of the UK’s planned exit from the bloc on Friday, nearly four years since the referendum.

However, Mr Johnson is under severe time pressure to get a trade deal signed before the end of the year when the transition period finishes.

The prime minister has repeatedly ruled out requesting an extension to the transition period, during which the UK abides by EU rules, past December 31st.

The IoD survey, which garnered opinions during the fourth quarter of 2019, suggested that 60 per cent of respondents believe that the financial performance of their organisation will improve in 2020 despite the uncertainty of the Ireland’s future trading relations with the UK.

“In terms of potential market growth, there has been a 10 per cent increase since Q3 2019 in the number of business leaders in Q4 2019 that see Ireland as a market with opportunities for growth in 2020 (71 per cent),” it said.

The IoD monitors business sentiment in Ireland on a quarterly basis throughout the year across a range of consistent criteria and topical issues in its Director Sentiment Monitor.