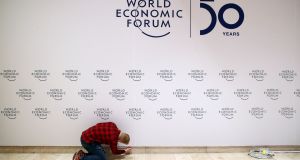 Preparing for the annual meeting of the World Economic Forum (WEF) in Davos, Switzerland: The climate crisis and sustainability are shaping up to dominate the event this year. Photograph: Denis Balibouse

European commissioner for trade Phil Hogan has stepped in to address business leaders attending IDA Ireland’s annual dinner at Davos this week, as the Irish contingent at the World Economic Forum (WEF) is shaping up to be the smallest in recent times.

Taoiseach Leo Varadkar had been due to host the IDA dinner on Thursday for 40-50 international executives at the Swiss Alpine village, but this was cancelled last week as he called a general election for February 8th. Minister for Finance Paschal Donohoe also cancelled his planned appearance as the campaign got under way.

WEF regulars Bono and Denis O’Brien will also not be attending this year, according to their representatives.

Irish delegates among the almost 3,000 expected to attend the four-day forum include University College Dublin professor Emma Teeling, who will be presenting on how bats “could reveal the secrets to longer, healthier lives”; and activist and social entrepreneur Caroline Casey, who is legally blind and will be pressing businesses on disability inclusion.

Ireland’s technology sector will be represented at the forum by the likes of Mark Roden, chief executive of mobile top-up company Ding, and Lory Kehoe, managing director of the Irish arm of ConsenSys, the world’s largest blockchain company.

The climate crisis and sustainability are shaping up to dominate the WEF this year, with Swedish environmental activist Greta Thunberg appearing on a panel on Tuesday, shortly before US president Donald Trump. Mr Trump, a climate change sceptic, will deliver an address hours before his US Senate impeachment trial commences.