Department of Finance plays down significance of softer tax numbers 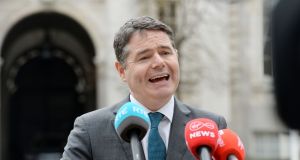 Minister for Finance Paschal Donohoe: the latest figures from his department for the four months to the end of April show income tax generated €6.9bn, which was €173m or 2.4% below target

The Department of Finance has played down the significance of weaker-than-expected income tax and VAT receipts in the latest exchequer returns, insisting the weakness was due to technical and timing factors rather than a slowdown in the economy.

The latest figures for the four months to the end of April show income tax generated €6.9 billion, which was €173 million or 2.4 per cent below target and out of kilter with the current growth in employment.

However the department linked this to a once-off underperformance in February, while noting income tax receipts were up 6.6 per cent year-on-year.

VAT receipts, which reflect consumer spending, also came in below target at €4.9 billion, but the department put this down to higher-than-expected VAT repayments during the month.

The government’s overall tax take was boosted by stronger-than-expected corporation tax receipts, which have generated record revenues in recent years.

The business tax brought in €468 million, which was 50 per cent or € 157 million ahead of target. However, the bulk of revenue from the tax does not flow in until later in the year, and the government is expecting a fall-off in receipts in 2019.

The public coffers were also boosted by excise duty, which was behind target for most of last year due to the introduction of plain packaging for tobacco products, but has exceeded expectations in 2019, generating just under €2 billion, €142 million above profile.

Overall the government collected close to €15.6 billion in taxes so far this year, 5.7 per cent up on last year’s tally at this stage. The total was marginally below (€26m) what the department had targeted.

The figures resulted in an exchequer deficit of €3.2 billion for April. This compares to a deficit of €3.4 billion in the same period last year.

Non-voted expenditure was just over €4 billion, which was up nearly 3 per cent or €115 million on last year.

The increase was driven by a greater EU contribution due to both the State’s increased share of EU obligations and the timing of funds called up by the European Commission.

“Income tax figures remain mixed. There was a dip in the expected returns in February, which still hasn’t been clawed back,” said Peter Vale, tax partner at Grant Thornton Ireland. “ Given the strength of the labour market there is no obvious reason as to why income tax receipts would not be at least on track to hit target at this stage of the year.”

KBC Bank economist Austin Hughes said: “The weakness in April taxes likely owes more to technical and timing factors than a marked slowdown in the economy even if there are some hints of the influence of a more modest pace of growth.

“Importantly, the scale of misses versus profile in a number of headings means the May returns will be watched very closely to tell if the April weakness continues or proves to be an aberration.”

1 Aldi to impose limits as Christmas toys go on sale
2 Fair deal? Family at odds with hospital and each other not so sure
3 What to consider if older person or loved one needs care at home
4 Irish elearning company LearnUpon closes €47.4 million investment
5 First look: Is the iPhone 12 Pro the best smartphone out there?
6 Monsoon landlords win challenge over creditors arrangement that cut rents
7 Ulster Bank to meet Paschal Donohoe to discuss bank’s future
8 Bank of America names new head of EU hub as Brexit looms
9 ‘I hate haggling because I hate when people do it to me’
10 Irish house prices could buck European trend and fall this year, says S&P
Real news has value SUBSCRIBE