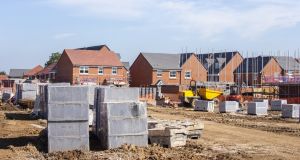 The Republic’s banking system “remains vulnerable” to property price corrections, a research note published by the Central Bank of Ireland has found, noting that exposure to real estate accounts for about 70 per cent of lending balances.

While the banking system has increased its capacity to absorb shocks since the global financial crisis, the sector remains more exposed to property than its European peers, according to a financial stability note published by the financial regulator.

The higher concentration of Irish banks toward real estate lending is primarily due to residential properties, a change from previous years as the share of commercial real estate decreased.

Improved stability in the system derives from more stable funding sources, higher capital and liquidity ratios, more intensive supervision and the introduction of macroprudential rules, according to the Central Bank. Additionally, banks resident here have more than halved their loan books between 2006 (€272 billion) and 2017 (€133 billion).

The Republic’s experience with real estate exposures in the recent past resulted in large losses by banks followed by substantial government intervention after commercial and residential property prices declined by 67 and 51 per cent respectively.

In its research, the Central Bank finds that the ongoing high concentration in real estate lending “warrants close attention”.

“The close relationship between the banking system and real-estate markets means that banks with high exposure to real estate can be sensitive to price fluctuations.