Eurostat figures show unemployment ranges from 1.3% in rich north to 35% in poorer south 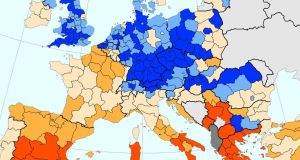 The cohesion of the European Union is under severe strain. Apart from the imminent fracturing of the bloc from Brexit, nationalist-populist, anti-EU governments are already in power in Italy, Hungary and Poland, while far-right forces are gaining ground in France, Germany and most recently in Spain. All this poses an unprecedented threat to European unity.

An interesting reference point was yesterday’s unemployment figures from Eurostat, the European Commission’s statistics agency. The figures show unemployments rates across Europe last year ranged from 1.3 per cent in the rich north to 35.1 per cent in some of the poorer southern regions.

They included 20 regions in Germany and 15 in the United Kingdom, nine in Poland, seven in the Czech Republic, five in Hungary, four each in the Netherlands and Austria, two in Belgium and Romania and one each in Bulgaria, Italy and Slovakia.

In contrast, 30 regions had a rate of at least 13.8 per cent, double that of the EU: 12 regions in Greece, eight in Spain and five each in France and Italy.

After 60 years of economic and political bridge-building, the difference between north and south is as stark as it ever was. While much of the discord politically can be linked to areas of high unemployment, much of it cannot. A large part of it seems to be prospering in areas that are relatively well-off economically, which probably goes to show the impact of the debate over immigration.

The UK is an interesting case in point. While most of the country is clad in blue, signifying low unemployment in the Eurostat map, a lot of the UK growth in employment has been in precarious or low-paying sectors. Equally while France looks more like its southern neighbours in terms unemployment, more generous social provisions for the jobless have to be taken into account.