Facebook pivots, Brexit lulls and the company that wants us to love Mondays

Planet Business: Taking it to ‘the next level in every respect’ 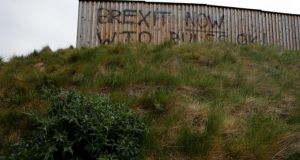 Image of the week: Mount Brexit

“Brexit now, WTO rules OK!” reads this pro-Brexit graffiti on a fence above a new housing development in Thrapston, Northamptonshire – a part of the world that recorded a 64.2 per cent Leave vote in the 2016 referendum.

The World Trade Organisation rules fan responsible for this graffiti is just really keen on a 35 per cent WTO tariff on dairy imports and a 10 per cent one on cars and would like an element of urgency injected into the current Brexit political lull – admittedly, a common frustration. Consider this desolate hill with its corrugated iron monument to a Hard Brexit a metaphor for the state of politics in Britain in 2019. It’s still a lot more edifying than the average scene inside the House of Commons, to be fair.

7.6% Decline in traditional mail volumes at An Post in 2018, in line with international trends, and following an 8 per cent drop the previous year.

60% Surge in parcel volumes in the November-December period, making it An Post’s “busiest ever Christmas for parcels”. Over the full year, parcel business was up 40 per cent.

1.3 million Number of customer visits to the network of post offices every week.

Getting to know: Adam Neumann

Adam Neumann loves Mondays. He loves them so much, the business he co-founded, the We Company (previously known as WeWork), trademarked the line “thank God, it’s Monday”. Now New York-based Neumann, who was raised on a kibbutz in Israel, wants to take the giant landlord of co-working spaces to “the next level in every respect”, which means an initial public offering (IPO), according to a memo sent to employees.

Let’s just hope every Monday on the New York Stock Exchange goes well for the stock. Neumann loved growing up on a kibbutz save for one thing – everyone was paid the same amount, which he didn’t think was fair. He has called WeWork a “capitalistic kibbutz”: a bit of a community vibe, but also a “you eat what you kill” one. “Do what you love” is another of the company’s sayings.

Mark Zuckerberg wants to draw a line under everything we know about Facebook so far and “pivot” to a whole new Facebook that maybe people won’t get so annoyed about. Here are some of the promised features.

1. Private like counts Instagram is trialling a feature that would hide the “likes” a post gets from viewers. The account owner will still be able to see them, but the public competition for likes would be stood down.

2. Messenger WhatsApp merger Facebook’s Messenger app will now have end-to-end encryption by default as part of the plan to fully integrate it with WhatsApp.

3. Ephemeral formats Facebook has over the years come round to the idea that people want to communicate in a vanishing Snapchat-style manner, not leave a permanent web record of everything they have ever said or done.

4. Insta-what-now? Instagram text, stickers and drawings won’t have to start with an underlying photograph or video. This sounds bad.

5. No more blue In a redesign of the Facebook interface, the corporate blue branding will disappear from the app and site.