Regulator says US economy is advancing at a ‘solid’ rate overall 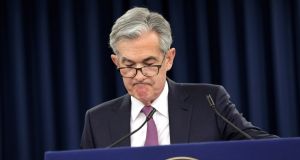 The Federal Reserve flagged signs that inflation has weakened despite solid growth as it reiterated its determination to be “patient” before moving interest rates again.

The US central bank kept the target range for the federal funds rate unchanged at 2.25 to 2.5 per cent on Wednesday, as widely expected in financial markets, while making a technical tweak to one of its key rates to keep borrowing costs exactly where it wants to see them.

The Fed declared that the economy is advancing at a “solid” rate overall, but it also observed that household spending and business investment decelerated in the first quarter, and inflation is now “running below” its 2 per cent target.

Mr Powell said in the press conference that while the Fed would be worried if inflation ran persistently below its target, there was reason to believe that the recent weakness in price growth could prove to be transient. The Fed, he added, did not currently see a strong case for moving in either direction.

US Treasury prices extended their rally on the earlier Fed statement, pushing yields lower on the inflation remarks and the speculation that the Fed still could move to cut rates this year.

This prompted a fall in the yield on the benchmark 10-year note by as much as 5 basis points to 2.457 per cent. The two-year note yield was down 5.4 bps at 2.213 per cent. The dollar index was unchanged, remaining down 0.2 per cent after the Fed statement.

The S&P 500 climbed 0.3 per cent to retest the fresh intraday record set earlier in the session, while the Nasdaq rose 0.6 per cent.

The Fed, led by chairman Jay Powell, is under intense pressure from President Donald Trump to ease borrowing costs to keep growth firm as the US heads for its longest-ever economic expansion. Many investors have also been counting on a rate reduction, with traders betting on a downward move before the end of the year.

However the Fed appears to be in a holding pattern as policymakers weigh up conflicting economic evidence. Headline gross domestic product growth remains strong, at an annualised 3.2 per cent in the first quarter, and some of the overseas risks that have nagged at policymakers in recent months appear to have diminished, particularly in China.

Conditions on financial markets have also improved following the rocky end to 2018. On the other hand US private demand grew at a sluggish pace in the first three months of the year, and soft inflation is continuing to puzzle Fed officials as above-trend growth and unemployment of just 3.8 per cent fail to push year-on-year price growth durably to the 2 per cent target.

“On a 12-month basis, overall inflation and inflation for items other than food and energy have declined and are running below 2 per cent,” the central bank said in a statement following its latest two-day meeting.

While the central bank kept its target range for rates unchanged, it made a technical adjustment to the rate of interest paid on excess bank reserves, which is one of the tools it uses to steer borrowing costs. This entailed a small cut in that rate to 2.35 per cent, in this hopes that this will counter an upward drift in the effective federal funds rate.

Policymakers forecast no change in rates this year when they met in March, but some Fed officials have started hinting that the central bank could consider lowering interest rates if inflation continues to disappoint – even in the absence of a major looming economic slump.

Wednesday’s statement from the Federal Open Market Committee gave no clear hints either way, instead repeating past language on the Fed’s decision to be patient before making any new moves.

“In light of global economic and financial developments and muted inflation pressures, the Committee will be patient as it determines what future adjustments to the target range for the federal funds rate may be appropriate to support these outcomes,” the central bank said in its statement.

The risk of considering rate reductions is that this could send a bearish signal about the economy outlook and end up spooking investors. The Fed is also grappling with unprecedented public lobbying from President Trump, who not only wants to see the central bank slash rates but restart its quantitative easing programme. The central bank would not wish to allow any appearance that it is buckling under presidential pressure. – Copyright The Financial Times Limited 2019