Business tax windfall leaves Government ahead of target by €660m 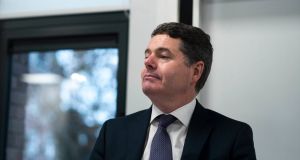 Minister for Finance Paschal Donohoe had originally signalled that 2019 receipts would be behind what was an ‘exceptional 2018’. Photograph: John Ohle

Corporation tax receipts hit a record of €6.9 billion for the year to October, more than €660 million ahead of the Government’s target, the latest exchequer returns show.

The figures show receipts from the business tax totalled €6.88 billion in October, 10.6 per ahead of what had been forecast.

Minister for Finance Paschal Donohoe had originally signalled that 2019 receipts would be behind what was an “exceptional 2018”. Last year’s receipts were boosted by a large “one-off” payment made by a single company in November.

However, the windfall, which is linked to the onshoring of assets here and increased corporate profitability generally, has continued and is now expected to exceed last year’s record annual total of €10.4 billion.

Corporation tax receipts have more than doubled since 2014 but nearly 50 per cent of the total comes from just 10 firms, understood to include tech giants Apple, Microsoft, Dell, Google and Oracle.

As a result the Government has been warned not to use the excess revenue to fund permanent spending measures.

The exchequer numbers show the Government’s total tax take for the first 10 months of the year was just under €45 billion. This was €706 million (1.6 per cent) above profile for the year.

Income tax, the Government’s largest tax channel, generated just under €17.6 billion, which was €1.3 billion up on last year’s total at this stage, reflecting the strong level of employment growth in the economy.

VAT, which reflects the strength of retail sales, came in marginally below target at €12.5 billion, but was significantly up on last year. Excise duty also came ahead of target at just under €4.9 billion.

The figures pointed to an exchequer deficit of just under €1.7 billion for October, compared with a €2.7 billion deficit at this stage last year. The €998 million year-on-year improvement is driven by increases across all revenue streams, the Department of Finance said.

The Government is on course to run a budget surplus this year for only the second time in 12 years.

On the spending side, exchequer expenditure totalled just under €51 billion for the 10 months. Within this, health spending, a perennial source of spending overruns in general, was put at just over €14 billion, 8 per cent up on last year.

“While October tends to be a quiet month on the tax receipts front, there were a few interesting numbers in the latest figures,” said Peter Vale, tax partner at Grant Thornton Ireland.

“On the positive side, corporation tax receipts continue to impress, with a strong October showing. At this stage it wouldn’t be a surprise if figures for the full year were €1 billion ahead of last year,” he said.

“This is somewhat remarkable given that the Minister had originally signalled that 2019 receipts would be behind what was an exceptional 2018,” he added.

Mr Vale said it was uncertain whether the positive trend could continue.

“There is pressure globally to push taxable profits to market jurisdictions, which would erode a portion of Ireland’s corporate tax base,” he said.

“However, it will likely be some years before these changes are implemented, at which time for other reasons we may see a natural increase in our corporate tax take,” Mr Vale said.