Planet Business: It’s been another week of wholly unsustainable activity 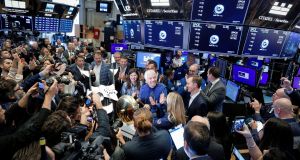 Earthbound – for now – Richard Branson rings the bell on the floor of the New York Stock Exchange. Photograph: Brendan McDermid/Reuters

Image of the week: Galactic ambition

With the stock ticker SPCE, Richard Branson’s Virgin Galactic Holdings launched this week, not into space, but on the more Earthly creation that is the New York Stock Exchange. Hundreds of rich people have, over the past 14 years, paid or put down deposits for the privilege of flying on one of Virgin’s forever-postponed suborbital flights and some were on hand this Monday as Branson did the honours with the opening bell on Wall Street. The company was valued at about $2.3 billion (€2.1bn) on its market debut, which some analysts felt was a touch astronomical for an enterprise that can be unwound by a single accident and hasn’t exactly been going at warp speed in recent years. The 90-minute Virgin flights cost about $250,000, but the good news is that other space tourism options are, or possibly will be, available. Anyone unsure about going the Branson route may eventually be able to space-fly with Jeff Bezos or Elon Musk.

In numbers: Coining it

Number of special Brexit 50 pence coins dated October 31st that were ordered by UK chancellor Sajid Javid. Hundreds of thousands of the coins were already minted by the time Brexit was deferred and will now be melted down.

Slightly more modest number of commemorative Brexit coins that Javid’s predecessor Philip “rogue Conservative” Hammond planned ahead of the original March 29th date. Like the new set, they were to bear the message “peace, prosperity and friendship with all nations”.

Price tag that Hammond’s limited edition 50 pence coins would have cost to avid collectors – all in all, just a slightly less bad plan.

Getting to know: Karl-Johan Persson

Karl-Johan Persson (44) is the billionaire chief executive of Swedish-owned fashion giant H&M. His father Stefan – the son of H&M’s founder Erling Persson – is Sweden’s richest man. Persson the younger has expressed his concern about what he sees as the “terrible” impact of shaming consumers for their, well, consumption. Many of the climate crisis protests are “about ‘stop doing things, stop consuming, stop flying’,” which he argues will have only “a small environmental impact”, but “terrible social consequences”. Persson was swift to sign H&M up to a Stella McCartney-backed initiative on fast-fashion waste a couple of years ago, and agrees that the $2.5 trillion industry – alongside other industries, politicians and individuals – must do more. But he’s calling for a greater emphasis on renewable energy, sustainable materials and other environmental innovations in place of less nuanced castigations of people for doing things and buying things.

In further proof that the corporate world is incapable of enjoying a nice wind down before Christmas, there’s many a takeover bid or merger plan in the offing as 2019 enters the final stretch.

1. JustEat and Takeaway. com. JustEat has recommended the latter’s offer to its shareholders, but investment vehicle Prosus has annoyed Takeaway.com by making its own bid.

2. Fiat Chrysler and PSA Group. The French owner of Peugeot is flirting with its US-Italian rival, which is on the rebound after it couldn’t quite make a deal with Renault work earlier this year.

4. Thyssenkrupp’s elevators unit. The German industrial group has invited indicative bids for its prized elevator business from interested parties hoping for a bit of an M&A lift.

5. LVMH and Tiffany’s. Europe’s richest man, LVMH boss Bernard Arnault, fancies breakfast at Tiffany’s, but his move on the US jeweller may flush out other courtiers.