Broadband contract sign-off and Dublin waste business up for sale 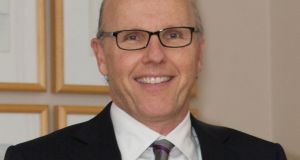 Granahan McCourt chairman and chief executive David McCourt: Minister for Communications Richard Bruton is expected to sign a €2.9 billion contract with National Broadband Ireland, a firm established by Granahan McCourt, according to the Sunday Times

The Government is expected to sign the €2.9 billion contract for the national broadband plan next week, according to the Sunday Times. It reports sources as saying the Minister for Communications, Richard Bruton, intends seeking approval to sign the contract at the cabinet meeting on Tuesday, November 12th. He is expected to sign the contract with National Broadband Ireland, a firm established by preferred bidder Granahan McCourt, headed by Irish-American entrepreneur David McCourt, on the same day.

The campaign of violence against Quinn Industrial Holdings (QIH) is starting to damage businesses across the border region, according to an interview with senior figures at the company in the Sunday Business Post. They quote non-executive director John McCartin as saying he was aware of one local business that lost a multimillion-euro investment because of the level of lawlessness in the region.

The Government is drafting new legislation to reform Limited Partnerships (LP) as registrations of the secretive structures in Ireland are on the way to tripling since 2014, according to the Sunday Business Post. LP-like structures have been implicated in money-laundering scandals in Scotland, and are the vehicles of choice for private capital in financially secretive jurisdictions such as Delaware, the Cayman Islands and Luxembourg.

In corporate news, the Sunday Times reports that industry bidders are circling Key Waste, one of the dominant players in the Dublin waste market, raising the prospect of a fresh wave of consolidation in the sector. The article says Key Waste could be worth more than €50 million in any transaction and that the City Bin Co is likely to be among those making the running, alongside trade rivals Greyhound Recycling, Thorntons Recycling and Panda.

The Sunday Independent reports that Irish renewable energy company DP Energy has started the process of developing its first offshore wind farm off the coast of Cork, which could involve an investment worth an estimated €1.76 billion.

Meanwhile, the Sunday Times reports the adult children of businessman Seán Quinn have set up a new business, Quinn Power, with ambitions to enter the energy sector.

Finally, British specialist bakery business Delice de France has been sold to its management by Swiss-Irish group Aryzta for an undisclosed sum. Delice de France was first acquired by IAWS 20 years ago for €52 million, writes Samantha McCaughren in the Sunday Independent. IAWS went on to merge with Swiss group Hiestand to form Aryzta in 2008.