Decline in new vacancies suggests jobs growth may have ‘plateaued’ 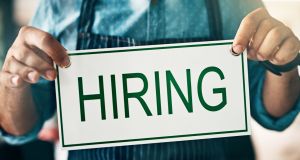 The decrease in jobs available is most prominent in sectors including science, pharma and food roles

Further evidence has emerged of a cooling off of jobs growth, after an analysis by recruitment website Irishjobs.ie of vacancies on its site found that openings in the third quarter of the year were down 8 per cent on the same period in 2018.

The overall level of vacancies between July and the end of September was also down 5 per cent on the previous quarter in 2019, the analysis suggests. The website said its research shows that new jobs growth has now stalled for the second consecutive quarter and “caution is the prevailing mood” in many sectors.

The decrease in jobs available is most prominent in sectors including science, pharma and food roles, down 24 per cent on Irishjobs.ie; healthcare jobs, down 18 per cent; and banking and finance vacancies, which were down by 1 per cent.

There was also no growth in the level of construction jobs advertised on the website, compared to the same period last. This suggests “the industry has reached its peak”, says Irishjobs.

Despite worries that the sector could suffer a sharp drop in activity from an unruly Brexit, the tourism sector “remains a pillar of the economy”, accounting for almost a third of all vacancies on Irishjobs in the period. The number of openings in the sector advertised between July and September rose by 7 per cent.

“This trend is illustrative of multiple factors, with Brexit being the most obvious,” said Jane Lorigan, chief executive of the company that owns Irishjobs.

“The Irish jobs market, while built on a strong, diversified foundation, appears to be plateauing after years of post-crash growth... We anticipate caution to be the prevailing mood among employers as we enter the new year.”