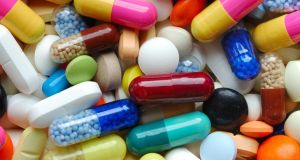 The latest monthly numbers were almost entirely driven by the pharma-dominated modern sector, which rose nearly 17% in September

Central Statistics Office (CSO) figures show production for manufacturing industries here was 9.4 per cent higher on a monthly basis in September and 4.1 per cent up year on year.

The latest monthly numbers were almost entirely driven by the pharma-dominated modern sector, which rose nearly 17 per cent in September, with output in the traditional sector contracting.

Factory activity across the euro zone, meanwhile, contracted sharply last month as demand was again stifled by the US trade war with China and the persistent lack of clarity over the UK’s departure from the European Union, a survey showed. Worryingly for policymakers at the European Central Bank, who have restarted a €2.6 trillion bond-buying programme after cutting interest rates on deposits in September, the malaise appears to be spread across the region.

New ECB president Christine Lagarde will have to heal a rift between representatives of cash-rich countries such as Germany, the Netherlands and France, which opposed the decision to resume bond purchases, and the struggling periphery. But those struggles appear widespread, and manufacturing activity in Germany, Europe’s largest economy, remained stuck in recession last month as new orders fell for the 13th month running and factories slashed jobs at the fastest pace in almost 10 years.

Italian manufacturing activity declined for the 13th month running, while in Spain it contracted for a fifth month as political turmoil at home and abroad took its toll. However, the other of the bloc’s four biggest economies, France, bucked the trend, and factory growth increased modestly, probably supported by billions of euro of stimulus from the government.

IHS Markit’s final manufacturing Purchasing Managers’ Index (PMI) for the euro zone was 45.9, barely above September’s seven-year low reading of 45.7 and its ninth month below the 50 mark separating growth from contraction. “It was better than anticipated but it was still heavily in negative territory. It basically is telling us that the euro zone manufacturing sector is in recession,” said Peter Dixon at Commerzbank. “To a large extent, it is because the euro zone is being hammered by the US-China trade dispute which is hampering world trade.” – Additional reporting: Reuters