The relentless downward spiral of Brexit

With checks between the North and Britain adding to the costs for businesses, it’s no wonder the DUP is cross 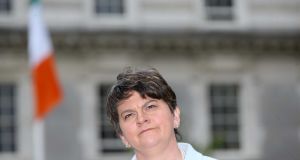 DUP leader Arlene Foster. The first Brexit agreement in December 2017 between May’s government and the EU had to be rapidly altered because of opposition from her party. Photograph: Sam Boal/RollingNews.ie

The Brexit saga has pursued a downward spiral, with successive provisional “agreements” with the EU providing steadily worse outcomes for the economies of Britain, Northern Ireland and the Republic. However, things could be even more serious: a no-deal exit would compound the economic costs of a hard Brexit.

Fortunately, a no-deal Brexit looks less likely at this juncture than it did a month ago. However, even if Boris Johnson’s Withdrawal Bill is eventually passed by Westminster, unless a trade agreement is concluded by the end of next year the UK could then still leave without a deal.

The bigger the disruption to UK trade with the EU, the bigger the cost to the UK, according to the economic evidence. If the UK were to remain in the customs union and the EU single market, Brexit would do less damage to its economy. If, as now seems probable, the UK leaves both the customs union and the single market, it will face a much greater hit.

The evidence also suggests that even if trade agreements are eventually reached with the US and other third countries, this would go nowhere near compensating for the UK’s losses in the EU market.

Already the prospect of Brexit has significantly reduced the rate of growth of the UK economy below what it could have been. Businesses have stopped investing, and consumers are beginning to worry about their future. However, the worst has yet to come. Because the Johnson deal will involve looser trading links with the EU, the consequences will be worse than had Theresa May’s deal gone through.

The first agreement in December 2017 between May’s government and the EU had to be rapidly altered because of opposition by the DUP. As initially envisaged there was a Northern Ireland-only backstop that was designed to avoid a border in Ireland, though it would have resulted in a limited border between the North and Britain. As a result of the DUP’s protests this was rapidly amended by May’s government so that the backstop was to cover all of the UK.

The logic of a UK-wide backstop was that in the final settlement the UK would have had to remain close to both the EU customs union and the single market. It was quite a surprise that the UK government proposed this approach after their red lines.

However, while to us in the Republic it was obvious that the UK under this arrangement would be constrained to stay very close to the EU, it took a few days for the implications to sink in in Britain. That was when the then Brexit secretary David Davis sought on TV to back away from what his government had proposed a few days before.

The Conservative government could not live with what they had agreed to, and there followed a year of tortuous negotiations trying to find a way around the constraints of a UK-wide backstop.

The current draft deal will keep the Border between the Republic and the North open. However, there is a cost in that goods entering the North from Britain will be subject to checks.

All such checks add to costs and adversely affect trade. The problems of such checks will be more onerous for the retail sector in Northern Ireland because trucks supplying from Britain will contain a wide variety of goods, each of which may need to be separately declared.

The real surprise this week has been that while the UK government saw no need to check what was coming across the land Border under the previous draft agreement, under the current draft agreement they plan checks on goods travelling from the North to Britain. This shows that previous UK government claims of what technology could achieve were groundless.

These checks will add to the costs for businesses in the North in their primary export market Britain.

No wonder the DUP are cross.