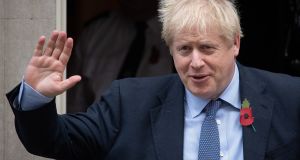 Boris Johnson: will the bluster of cutting regulation and diverging from the EU be slowly abandoned, as the economic cost becomes clearer?

Irish businesses will be relieved that the immediate threat of a no-deal Brexit has been removed. But, unfortunately, significant uncertainty still lies ahead – and the no-deal threat is still not entirely off the table. Nor, at the other end of the spectrum, is a second referendum after the UK general election. Perhaps the most remarkable thing is that such a wide range of Brexit outcomes is still possible.

All now rests on the election outcome, of course. But whether the withdrawal agreement passes or not, a return of Boris Johnson to Number 10 would likely point towards a harder form of Brexit. This means the planning undertaken by businesses for new customs procedures and tariffs may not – unfortunately – have been in vain. If Johnson pursues a harder form of Brexit and takes the UK economy on a divergent course in terms of regulations, then the EU will not offer an attractive trade deal, fearing it will be undercut by low-cost UK competitors.

Either way, for businesses and the economy, there are now two key deadlines. The first is the next Brexit date, January 31st and the question is will a withdrawal deal be through the House of Commons by then and, if not, what happens. The second deadline, if this is agreed, is June 2nd, 2020. This is the date by which a decision must be made on whether to extend the transition period, the standstill which comes in place after the UK leaves. The transition is due to run out in December of next year, but no one thinks a UK/EU trade deal could be done by then. So no extension of the transition period – it can go to end of 2021 or end of 2022 – runs the risks of World Trade Organisation tariffs and checks being imposed, at least for a period.

If Jeremy Corbyn wins, the wind will shift towards a softer Brexit and possibly a second referendum. For Johnson, the question would be whether the bluster of cutting regulation and diverging from the EU is slowly abandoned, as the economic cost becomes ever clearer. Some Irish sources wonder whether such a move to a new independent regulatory structure is even possible. So just what a Boris-style Brexit would look like remains unclear.