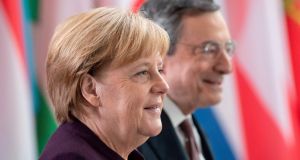 Outgoing European Central Bank president Mario Draghi made one last plea for euro zone fiscal support as he signed off from the presidency in a ceremony attended by the leaders of the bloc’s biggest economies.

Speaking in front of German chancellor Angela Merkel, French president Emmanuel Macron and Italian president Sergio Mattarella, as well his successor Christine Lagarde, Mr Draghi said low interest rates are no longer delivering the same degree of stimulus as in the past. For monetary policy to achieve its objective faster and with fewer side effect, it needs other policies to step up.

“We need a euro area fiscal capacity of adequate size and design: large enough to stabilise the monetary union, but designed not to create excessive moral hazard,” Mr Draghi said. “National policies cannot always guarantee the right fiscal stance for the euro area as a whole.”

The euro area has long been grappling with attempts to create a joint budget but has fallen short of what’s needed. Germany, which has run surpluses for half a decade, has balked at creating a common tool amid political fears that it might be used for unnecessarily loose spending elsewhere.

Mr Draghi noted that the United States was able to put the crisis behind it much faster than the 19-nation currency bloc, in part because of fiscal measures and a unified capital market – something the euro area has also so far struggled to complete.

“Monetary policy can do many things but not everything,” she said. “The ECB can’t do the homework of governments that they themselves need to finish to strengthen their competitiveness.”

Mr Macron, who led the most-recent drive for a European-level fiscal capacity, cited Mr Draghi’s legacy-defining statement of 2012 when he pledged to do “whatever it takes” to save the euro from its debt crisis.

“I can only salute the courage of the leader who knew, while respecting his mandate, how to call on member states to show ambition and go beyond our dogmas,” Mr Macron said. “It’s now up to us, heads of state and government, to carry this ‘whatever it takes’ to measure up to your courage and your clear-sightedness.”

Mr Draghi admitted that co-ordinating decentralised fiscal policies is inherently complex, but said that “uncoordinated policies are not enough, because the spillovers between countries from fiscal expansions are relatively low.”

The Italian, whose final day in the job is on Thursday, leaves Ms Lagarde with record-low interest rates and a fresh round of bond purchases that split members of his governing council.

The Frenchwoman has pledged continuity in monetary policy, but also signalled that a rethink of the institution’s strategy – something some officials have openly advocated – may be needed.

“Economic relationships and trends shift – policy reactions that were appropriate two decades ago, are no longer valid,” she said. “Only through continued research can we fully understand the contours of the problem and the ways in which we can address them, and propose new solutions.”

1 Son putting elderly dad under pressure to sign over land
2 BOI customers to be charged twice with bank fees on New Year’s Eve
3 How to gift your child a house deposit . . . tax free
4 Family in court dispute over hotels in Dublin and Galway
5 City of London makes late scramble to limit Brexit disruption
6 Irish designer of Oxford vaccine: ‘I’ve never worked so hard in my life’
7 Workers have little idea of the cost of retirement income
8 Stripe in talks for new funding at much higher valuation
9 Irish start-up which developed facial recognition for cows raising over $50m
10 Ryanair warns it may reduce more Irish services and relocate operations
Real news has value SUBSCRIBE